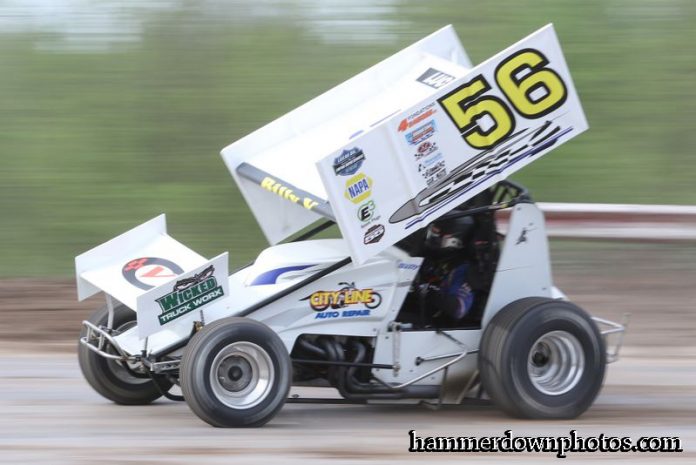 GRANBY, QUE – When you talk to Billy VanInwegen about his short Lucas Oil Empire Super Sprint (ESS) career he will tell you about the races that got away, the almost wins, the disappointments. After Friday night at Autodrome Granby, all that talk was put on the shelf…forever.

Starting in 10th position, VanInwegen took his #56 to the extreme high side of the Granby oval and passed giants among the ESS ranks. He went around Jason Barney, around Chuck Hebing and then on lap 11 he passed local favorite and many-time ESS champion Steve Poirier to take the lead and never look back. The win in the Mach 1 Chassis A-Main, Fondations 4 Saisons, Ohsweken Speedway point event netted him $2,110.

“This just wipes out all those other races that were still bugging me. Brad (Radivoy) and the gang work so hard and give me a good car, I am just glad I could do my job and reward them with a win,” VanInwegen noted with a smile, “This just hasn’t sunk in and will take a while, to pass the guys that I did. I am still amazed, they are just so good and you have to be on top of your game to even race with them.”

The win started literally last Sunday night after Utica-Rome. The team decided to change from the new car/motor combination and switch back to old and trusty. “We just weren’t good with the new car and we really don’t know why. It just never felt good and being an 11th place car here is not good,” he continued, “So we decided to change everything back to what we had last year and here we are.”


Chris Jones led the field down to the green but it was Poirier who quickly put his familiar #28FM into the lead. Usually when Poirier leads at Granby, it’s another victory notched in the belt. However this night had the VanInwegen twist.

For Poirier, second at Granby, getting passed for the victory would be discouraging but it definitely was not. “I am just happy to finally finish a race. Yea I got beat tonight but it was all about finishing and getting some confidence back,” Poirier elaborated, “Even after all these years you think you have all the confidence and you will be comfortable but I wasn’t at the beginning of this year and you do have some doubts. Yea I was second tonight but I felt good, the car felt good and the crew worked hard.”

Paulie Colagiovanni continued with his string of top five finishes rounding out the podium at Granby. He actually though he could have had a better result. “I don’t know what happened. On the start I was in the middle of the track and the car just pushed bad,” Paulie went on, “I just saw all the cars go high and low around me and I dropped to ninth or something like that. It was weird, but the car was good, just got back in the my groove and starting to get back around them. I just wish I had that early lap back.”

Jordan Poirier with a strong effort to take fourth over Hebing at the finish. Rounding out the top ten were Barney, Kyle Moffit, Dylan Swiernik, Parker Evans and Matt Tanner (who was the last car on the lead lap). A total of 28 sprints filled the pits in front of the usual big Granby crowd.