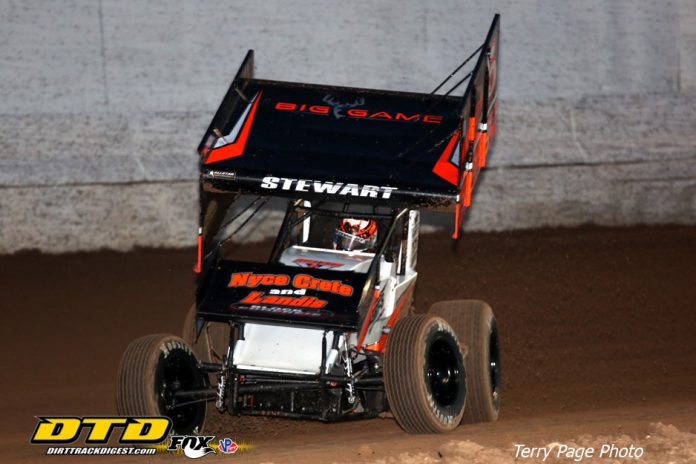 NASHVILLE, TN – Among the music halls and concert venues of Nashville, there was no bigger stage than the World of Outlaws NOS Energy Drink Sprint Car Series’ Music City Outlaw Nationals at the Nashville Fairgrounds Speedway Saturday night.

That kind of stage can birth a star. Rejuvenate a career.

Coming up on almost a year since winning a race, that’s exactly what Shane Stewart needed.

His winning performance Saturday night showed it. In spectacular fashion, the Oklahoma-native claimed his first win of the season with his new CJB Motorsports team and his 34th career World of Outlaws win.

With one win during the 2018 season, Stewart was released from his ride with Kyle Larson Racing at the end of the year. At the same time CJB Motorsports parted ways with its then driver, David Gravel – a pairing that never finished worse than third in points together.

The two paired together for the 2019 season, starting the season off strong in Volusia by leading laps and finishing second in the opening race. From there on out, races of disappointment and wins that could have been.

It was a scenario Stewart almost had to cope with again.

With a pinch of luck, Stewart’s team drew an early Qualifying order position, leading to the No. 5 car being second fastest to Brad Sweet’s track record breaking 14.083 sec. time. Stewart then went on to win his Drydene Heat race and finish second in the DIRTVision Fast Pass Dash – putting him on the outside pole for the 30-lap Feature.

Throwing his car around the tight turns of the quarter-mile track, Stewart took the lead on the first lap of the Feature and put distance between he and second-place lap after lap. His early run was cut short by Daryn Pittman spinning and bringing out the caution on Lap two.

On the restart, Stewart set sail again. Behind him, though, lurked another driver just as eager to return to Victory Lane.

In the early stage of year, Brent Marks missed two Features and didn’t find the top-10 until the tenth race of the 2019 season. The Myerstown, Pa.-native earned his first top-five during the first round of the Music City Outlaw Nationals Friday night and was poised to do better on night two.

Marks methodically charged his way from fourth to second by Lap five. Two laps later, he found himself to the outside of Stewart down the front stretch. The two went side-by-side into turn one. Marks high. Stewart low.

Stewart slid up the track in turn two, allowing Marks to dart underneath him exiting the corner. But before he could complete the pass, a caution came out for several cars tangled in turn four.

Marks showed his hand. Stewart now knew there was no cruising to a win. The battle was on.

When the race went back green, Stewart stuck to the high side, while Marks ran low. The red No. 19 car showed its nose to Stewart turn after turn. Until Lap 11.

Marks finally found enough traction on the bottom of turns three and four to pull past Stewart for the lead. He cleared the No. 5 car the next corner, but Stewart wasn’t ready to watch another potential win slip away. He launched his car around the outside of Marks through turns three and four and charged back to the lead.

Marks then returned the move by throwing his car to the bottom of turn one and sliding up in front of Stewart in the center of the turn. Stewart cut underneath Marks, but couldn’t find enough traction to challenge Marks again for the position.

Marks was on his way to a historic win.

Lap traffic soon became an obstacle, though. Stewart kept Marks in his crosshairs, giving the Pennsylvanian no room for error while the track slicked up each lap.

With nine laps to go, Marks misjudged his drive into turn one around the outside of a lapped car and hit the cushion. His error allowed Stewart to dart past him and reclaim the lead, again.

The win wasn’t his, yet. Marks stayed close behind and with three laps to go Sweet made it a three-horse race for the win, challenging Marks for second. And even though Stewart reclaimed the lead, he knew it was going to be a battle to keep it.

“I don’t think I had the best car, but I knew once we got in to lap traffic, I had to be patient,” Stewart said. “I knew the bottom was going to be key.”

Stewart cautiously slid his car to the bottom of the track each turn and eased back on the throttle off of it, leaving no opening for Marks to make a run. He did that with fine-tuned precision, leading to a standing ovation by the crowd as he soared past the checkered flag.

“It’s special,” Stewart said about the win. “Being the inaugural race here at Nashville. So many people here that came out to support the World of Outlaws, which is really cool to see. Just a big win. I don’t know where it ranks, but it’s up there for sure.”

For Marks, he was left meandering by his car, contemplating what could have been. But he still had fun.

“It actually was a lot of fun,” Marks said. “I thought the track was in real good shape there for the Feature and made it racy for us. Sort of took a little bit of rubber there toward the end. It wasn’t like lock down rubber, so when you’re following lap cars around and keep hearing people behind you because obviously everybody is so close, you’ve got to try to outsmart them.

“Another good thing to do is put a lap car between them. That’s what I tried to do and just caught the wall the wrong way.”

Sweet, who finished third said he hopes to continue to build momentum with his team. He cut a small chuck out of Donny Schatz’s points lead, now sitting 48 points behind the reigning champion in second.

Stewart’s win also puts him into Nashville’s history books. He became the second World of Outlaws driver to win on the Nashville Fairgrounds Speedway dirt track, constructed on the speedway’s quarter-mile asphalt track with about seven million pounds of dirt put on it. Schatz claimed the first night of the Music City Outlaw Nationals Friday night.

There was no bigger stage this weekend than the Music City Outlaw Nationals doubleheader. It birthed a new star of an event that left several fans asking when the Series will return to Nashville. And it rejuvenated Stewart’s season with a guitar shaped trophy and $25,000 pay day. More importantly, just a win. Exactly what he needed.

The World of Outlaws will make its next trip on Tuesday, June 4, to Fairbury Speedway in Fairbury, Ill. for the FVP Platinum Battery Showdown.