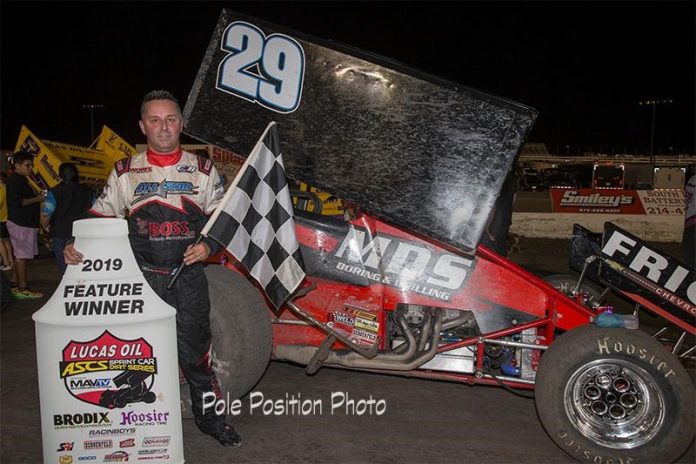 MESQUITE, TX – Winning by a nose in a last-lap drag race, Travis Rilat wheeled his MDS Boring and Drilling/BDS Motorsports No. 29 to Victory Lane over the Sage Fruit Co. No. 52 of Blake Hahn at the Devil’s Bowl Speedway on Tuesday night with the Lucas Oil American Sprint Car Series Presented by the MAVTV Motorsports Network.

A very emotional win for the BDS Motorsports Team, Rilat’s 28th career National Tour triumph came in a car that was built 20-years ago for the late Ronald Laney.

“I’m not going to say these guys had an advantage over us, but we’ve got a 20-year old racecar here. It’s not a raised-rail car, so every time I’d go through the corner and hit a rut, the car was dragging the ground and slowing me down, but this was one of Ronald Laney’s last cars. We drug it out about four years ago, went through it, and ran it a couple of times but it’s just been sitting in the shop so we decided to get it out and give a go. Mark [Laney] always talked about how fast this thing is, and it was,” stated Travis on the front stretch of the Devil’s Bowl Speedway as Mark Laney checked the tires of the No. 29.

Asked what it meant to see a car built for his son win with Travis behind the wheel, Mark replied, “I can’t hardly explain it. This just brings tears to my eyes.”

Getting the lead from Blake Hahn on Lap 16 when the No. 52 bicycled multiple times through the first and second turns, Rilat rolled into traffic with Sam Hafertepe, Jr. glued to his back bumper. Pulling next to Travis numerous times, the driver of the No. 29 was able to fend off the charge of the three-time Lucas Oil American Sprint Car Series Presented by the MAVTV Motorsports Network Champion.


Tip-toeing through traffic as the race progressed into the final five laps, Rilat and Hafertepe were quickly joined by Blake Hahn. Rebounding with a furious run after falling to fifth, Hahn made it a three-car fight for the lead on Lap 22. Scrambling around a slower machine into the first turn, the battle was put on hold as Matt Covington went for a ride off the third turn following hard contact with an infield tractor tire.

Into second on the restart, Hahn checked top and bottom for room to make the pass. Building a run to the final lap, Hahn hit the low side the final two turns as a misstep by Rilat off the fourth turn kicked the ShopTheBoss.com No. 29 sideways.

Wheel to wheel to the front straightaway, Rilat barely edged ahead of Hahn for the win. Getting the final step on the podium, Sam Hafertepe, Jr. regained the lead in the 2019 Lucas Oil American Sprint Car Series Presented by the MAVTV Motorsports Network Driver standings by a pair of markers over Blake Hahn.

Harli White crossed fourth with John Carney II emerging as the night’s Hard Charger with a run from 14th to fifth in the Mesilla Valley Transportation No. J2. Making up three positions, Wayne Johnson crossed sixth with Scott Bogucki in seventh. Jake Bubak grabbed eighth with Jamie Ball ninth. Making up five positions, Robbie Price completed the top ten.
The second round of the 2019 ASCS Sizzlin’ Summer Speedweek, a field of 27 drivers were on hand with three SCE Gaskets Heat Races won by Scott Bogucki, Blake Hahn, and Sam Hafertepe, Jr. The lone BMRS B-Feature was topped by Jordon Mallett. One provisional was used by Casey Carter.

The next event for the Lucas Oil American Sprint Car Series Presented by the MAVTV Motorsports Network is Wednesday, June 5 at Lawton Speedway. Gates open at 6:00 P.M. with the action getting underway at 8:00 P.M. Admission is $20 for adults with discounts for Senior, Military, and Kids 13-15 paying $15. Kids 6-12 pay $2 with children five and under get in free. More information on Lawton Speedway can be found online at http://www.lawtonspeedway.com.


SCE Gaskets Heat Races (Heat Race winners, plus the next 13 in Passing Points advance to the A-Feature)