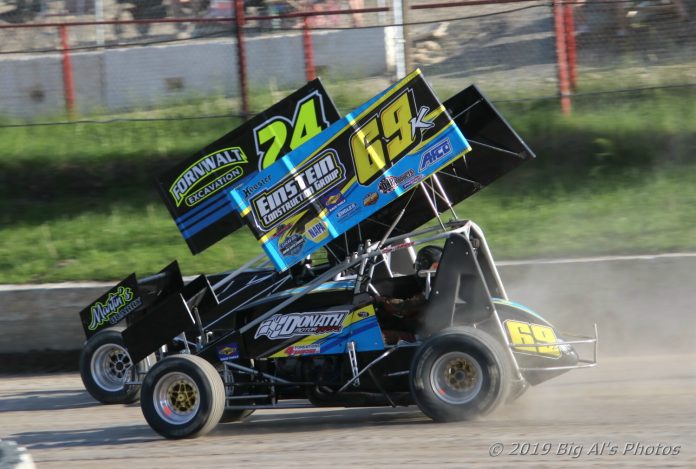 The Green Mountain Gear-Heads Sprint Cars of New England rolled into Bear Ridge Speedway Saturday June 8th for double Features after being rained out in their last visit to the ¼ mile speed plant.

The Makeup Feature from May25th was up first and Floyd Billington took the top spot at the drop of the green with Jordan Fornwalt second. Billington clung to the low groove with Jordan Fornwalt challenging up top. Fornwalt took the top spot on lap six and started to build a sizeable lead, only to see it erased with a lap nine caution for a spinning Kurt Conklin. On the restart Billington blasted back into the lead relegating Fornwalt to second. Just a lap later Will Hull claimed the second spot and set his sights on Billington, who continued to hug the bottom groove. While Hull Reached Billington’s rear bumper he couldn’t find a way around him to take the top spot. At the checkers it was Floyd Billington with the win, Will Hull was second with Tyler Austin making a late race pass to annex the third position. Jordan Fornwalt was fourth and Rick Stone completed the top five.

In the regularly scheduled Feature Will Hull fired from the pole and bolted into the lead and immediately started to distance himself from the rest of the field. Chris Donnelly, who started fourth, arrived in second with three laps complete and quickly started to erase Hull’s advantage. The only caution of the race flew on lap twelve for a minor spin and on the restart it was once again Hull who bolted to the lead. Donnelly stalked him for a few laps before going side-by-side for the lead and finally claiming the top spot on lap nineteen of the twenty five lap Feature. From there it was all Chris Donnelly as he rolled to the win. Will Hull once again finished second with Rick Stone winning an entertaining battle for third over Jordan Fornwalt, who was fourth. Floyd Billington completed the top five.

The next event for the Green Mountain Gear-Heads Sprint Cars of New England is at Bear Ridge Speedway on Saturday night, June 22nd.