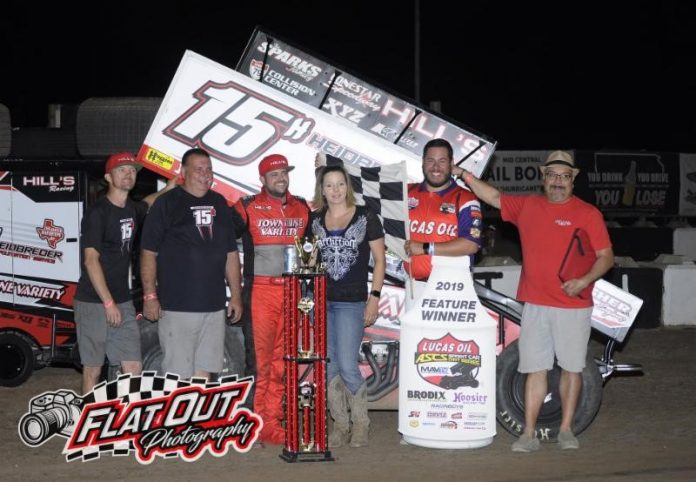 Getting the outside of the front row for Saturday’s 30-lap affair, Hafertepe, trailed into the first two turns as Blake Hahn led the way. Slight contact battling for the top spot into the third turn, Hafertepe was able to edge out the Sage Fruit, Co. No. 52 to lead the opening lap.

“I knew I had to get to the lead early and get to the bottom and I ended up getting into Blake down the backstretch, and I didn’t mean too. Just trying to get to the bottom otherwise, we could have easily ended up second or third all night,” commented Hafertepe.
Finding traffic by Lap 8, the driver of the Townline Variety No. 15 picked off several slower cars to open his advantage to well over a straightaway as Blake Hahn battled for the runner-up spot with John Carney II. Caution on Lap 19 for Tanner Berryhill, who spun in the fourth turn, Hafertepe’s lead was 5.396 seconds.

Restarting with four lapped cars in the mix, Hafertepe bolted as John Carney II worked around Blake Hahn for second. Taking the slower cars down to two before the caution flew again on Lap 23 for Grady Chandler who rolled to a stop after contact with Alex Hill, the restart saw Carney drive deep into the first turn, clearing the remaining slower machine and pulling almost even with Sam Hafertepe, Jr. Racing hard into turn three, Sam held point before yellow lights flashed again; this time for Fred Mattox and Matt Covington.

With no slower cars between himself and Sam Hafertepe, Jr., the Lap 24 restart saw Carney swap up his attack with a high side run to pull his Mesilla Valley Transportation No. J2 side by side again with Hafertepe. Able to run deep and swing to the center through turns three and four, Sam was able to put distance over Carney.


One final chance to battle of the lead as the field set up for a green, white, checkered finish after Robbie Price and Fred Mattox came together off the second turn, Carney couldn’t mount the charge as Sam Hafertepe, Jr. grabbed the win by 2.033 seconds.

Asked about the restarts and being pressured, Hafertepe replied, “We just didn’t have a lot of bite going straight to the throttle and actually we’ve had the problem several times. I was just trying to time it right. [John] Carey is good and he’s a smart racer, so I knew I had to do my job, or I’d be having to block into one and two so to come out on top was really good. I’ve never won here before, so this is really cool and I have to say, from the track we had at the start of the night to what they gave us at the end was a hell of a job to the track crew.”

Battling around the top five most of the night, Scott Bogucki ended up sixth with Roger Crockett seventh. Involved in an early caution and having to fight back from the tail, Grady Chandler came bake to finish eighth. Sean McClelland was ninth with Tanner Berryhill also rebounding from a caution to finish tenth.

A field of 21 was broken down into a trio of SCE Gaskets Heat Races with Harli White, Blake Hahn, and Scott Bogucki each earning wins. No Provisional starts were needed. Speedweek standings with Sam Hafertepe, Jr. earning the crown by 43 markers had John Carney II, Blake Hahn, Scott Bogucki, and Harli White complete the top five in driver standings.
The next events for the Lucas Oil American Sprint Car Series presented by the MAVTV Motorsports Network are promoted by Track Enterprises with Brown County Speedway in Aberdeen, S.D. on Friday, June 14 and Black Hills Speedway in Rapid City, S.D. on Saturday, June 15.