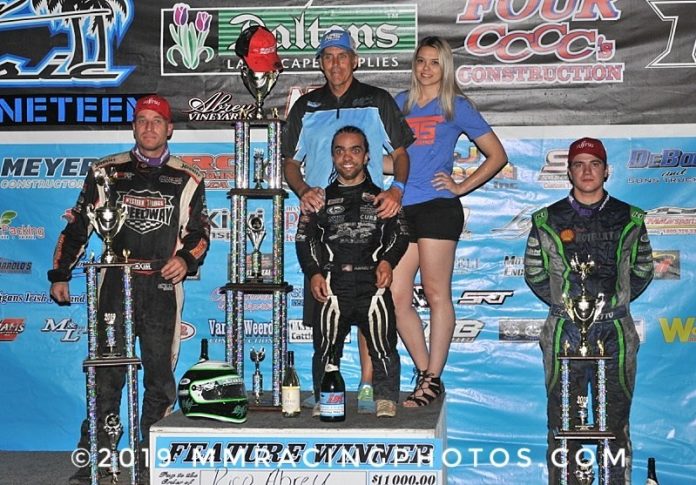 TULARE, CA –  A surprised Rico Abreu ended up in victory lane at the Peter Murphy Classic for the Fujitsu King of the West-NARC 410 Series sprint cars at the Thunderbowl Raceway on Saturday night.

Bud Kaeding had the lead coming to the checkered flag when he had an issue with the fourth-turn wall and ended up upside down causing a red flag and the race to go into overtime.

Abreu, piloting the Abreu Vineyards entry, had just taken over second place from Jonathan Allard, who had led the race he was passed by Kaeding. Allard and Colby Copeland made up the front row at the start with the recent series winner at Petaluma jumping to an early lead.

It was Copeland who would lead the first 12 laps until he slowed and who eventually cause a caution when he didn’t make it off the track. Allard, driving the iconic Weldon Offill Country Builders 88, would take over the lead on the restart and was closely followed by Kaeding who started in the third spot.

Kaeding passed Allard on the 17th circuit. The race would stay green with Kaeding comfortably up front until lap 24 when the caution would slow the race again when Matt DeMartini stopped on the front stretch. With a clear track, it was Kaeding who appeared to be headed for another Murphy Classic title, only to first bounce off the second turn wall and then climb the fourth turn wall and flip over, ending his chances at the $11,000 winner’s check. Kaeding was unhurt.

“My car was good, but not really as good as Bud’s (Kaeding),” admitted Abreu in victory lane. “You’re beating up against the wall because it’s the fast lane and there’s a lot of give and take up there. But you can knock an arm off or the top off and that looks like what happened to him. Bud set a torrid pace there at the end and I had to drive hard just to keep up. That’s just 410 sprint car racing.”

Abreu and Allard didn’t change positions in the overtime laps, but it was Dominic Scelzi who went from third to fifth. Both D.J. Netto and Ryan Bernal got around the Roth Motorsports No. 83 on the final lap. Netto’s third place effort in the Netto Ag/Rotella 76 KPC was notable in the fact that he crashed hard only an hour earlier in the 360 event. Bernal was driving the Tarlton Motorsports KPC.

Tim Kaeding, won the Aussie Pole Shuffle Dash and decided to take the challenge to start 11th and double his money. Unfortunately, mechanical issues curtailed that effort when he brought out the caution midway through the event. Earlier in the program, Kaeding led the 25 cars entered with a 13:844 second qualifying lap.

Heat races were picked off by Allard, Copeland and Netto.