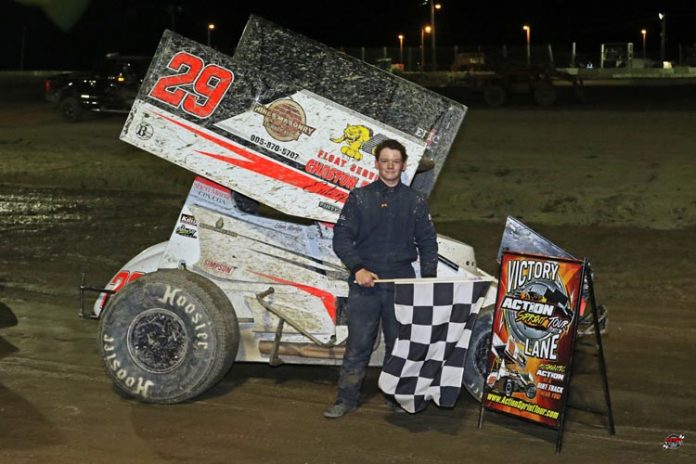 MERLIN, ONT – The Action Sprint Tour held its second event of the young 2019 season last Saturday night at the newly renamed Southern Ontario Motor Speedway (SOMS) and when the dust settled it was Binbrook, Ont. teenager Liam Martin who had piloted his No.29 to Victory Lane.

Martin lined-up in the eighth starting spot for the 20-lap main event and muscled his way past several tough contenders, including season opener winner Josh Hansen and veteran Ryan Hunsinger before holding off those two drivers right to the finish as well as former Crate Sprint Car champion Jesse McDonald. The victory was Martin’s first with the Action Sprint Tour, but second this season after he scored a win at Ohsweken Speedway on May 24. Martin also becomes the second different winner in as many races at SOMS in the tour’s history. Shone Evans won the inaugural visit last June.

Runner-up Josh Hansen continued his strong start to the season. The Beamsville, Ont. up-and-comer now has finishes of first and second with the AST this year to accompnay a pleasant beginning to his 360 Sprint Car career. The series most experienced driver, Ryan Hunsinger, earned a third-place finish, making it two consecutive top-five finishes to start the AST season for the driver hailing from Caledonia, Ont.

Welland’s Blaine Barrow had a pleasant outing and finished fourth in the main event, his best AST finish to date. Finally, Jesse McDonald navigated his way to a fifth-place finish after starting in the back half of the field in 11th.