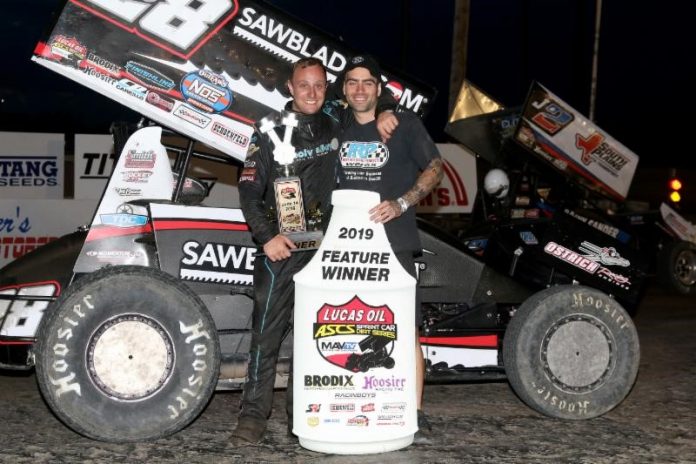 Scaling the back of his car to the cheer of the crowd, Bogucki was quick to thank those who have kept him going, “I can’t thank everyone who supports me enough. Without Sawblade.com, Dissolvalloy, Lee at Ostrich, just everyone who believes in this team, we couldn’t be here. Thank you so much.”

The fifth winner on the season, Bogucki trailed the first nine laps to 2018 winner, Matt Covington.

Working into slower traffic, Covington nearly went for a wild ride on Lap 8 after contact with Jeremy McCune off the fourth turn put the T&L Foundry No. 95 atop the McCune’s left rear. Able to work free and continue rolling, the near crash was just what the driver of the Sawblade.com No. 28 needed.

Working to a low pass off the fourth turn to complete Lap 9, Covington held the point, but would not be able to fend off the charge of Bogucki who grabbed the lead away on the following revolution.


“That’s never the way you want to get the lead, but at the same time we all have to race the lapped cars and after that, I knew I just needed to keep my nose clean,” commented Bogucki on the pass for the lead.

Slipping off the top of the first and second turns while working slower traffic near the race’s mid-point, Bogucki altered his line slightly to cheat the cushion and keep his speed up. Not giving much to anyone to capitalize on, even with caution on Lap 14, the moment of truth came as it looked like Scott was ready to take the checkered flag, only to see the caution lights come on.

With a trio of lapped cars between himself and Blake Hahn, who had worked to 11th on the low side of the Speedway, those cars took a right-hand turn to the Pits; leaving a clear shot for Hahn into the first two turns. Peeling to the bottom as Bogucki raced to the cushion, clean air and momentum were to the favor of the No. 28.

“That was not ideal at all,” chuckled Bogucki. “That’s normally when the wheel fall off the wagon, but when the called out the lineup, I just knew I had to get my speed up, hit my marks, and bring it home.”

In the end, Bogucki opened up his lead to 0.808 seconds over Blake Hahn, who was the night’s Hard Charger. Matt Covington ended up third after his mishap with Sam Hafertepe, Jr. fourth. Advancing seven positions, Harli White completed the top five. John Carney II slipped back two spots to sixth with Jordon Mallett in eighth. Roger Crockett, Tucker Doughty, and Alex Hill completed the top ten.

A pair of SCE Gaskets Heat Races were won by John Carney II and Matt Covington. No provisional was needed. The next event for the Lucas Oil American Sprint Car Series presented by the MAVTV Motorsports Network is Saturday, June 15 at Black Hills Speedway in Rapid City, S.D. Gates open at 5:00 P.M with racing at 7:00 P.M. (MT). Admission is $25 with kids 12 and under, who are over four-feet tall, admitted for $10. Kids under four-feet tall get in free. Black Hills Speedway is located at 2467 Jolly Ln. in Rapid City, S.D. For more information, log onto http://www.blackhillspeedwaybhs.com or call (307) 257-9589.

SCE Gaskets Heat Races (All teams advance to the A-Feature)