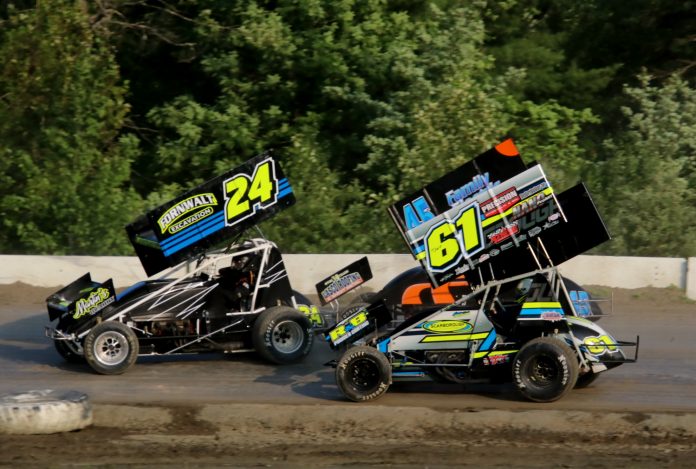 Feature time saw Rick Stone and Floyd Billington comprise the front row and when the green flew it was Billington who jumped to the lead in what turned out to be a caution free event. Johnny Scarborough, making his first start of the season with the Sprint Cars of New England quickly moved to second and after a few laps started to pressure Billington by using the outside groove with Rick Stone running third. Chris Donnelly, who started next to last on the field was working his way towards the front and made a move to by Stone for third with eleven laps complete. While Donnelly set his sights on the lead duo Johnny Scarborough changed his tactic and fell in behind Billington for a few laps. When the leaders reached lapped traffic Scarborough took advantage of a momentary bobble by Billington who ever so slightly opened up the bottom groove and Scarborough pounced on the opportunity and motored by on the low side to the lead with nineteen laps complete. The running order stayed the same for the remainder of the event with Johnny Scarborough taking the win, Floyd Billington was second and Chris Donnelly third. Will Hull and Rick Stone completed the top five.

In Victory Lane Johnny Scarborough commented that he is running a RaceSaver 305 engine instead of the traditional 360ci engine because he normally competes in the RaceSaver 305 series in Pennsylvania and tonight the 305 was an advantage because as slick as the track was the reduced horsepower cut down on the wheel spin which helped propel him to the front.

The next event for the Green Mountain Gear-Heads Sprint Cars of New England will be their second visit of the season to the Devils Bowl Speedway in West haven, VT on Wednesday, July 3rd.