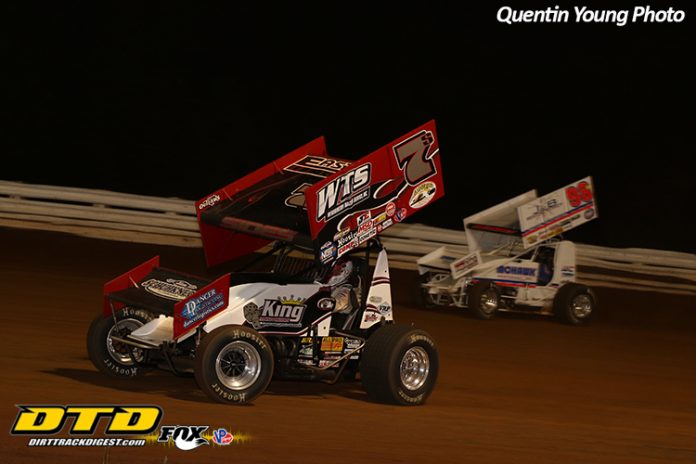 CONCORD, NC – The first half of the year hasn’t gone as envisioned for five of the full-time World of Outlaws NOS Energy Drink Sprint Car Series racers.

Or as Jason Sides – who has three top-10s in 24 starts – unabashedly stated, “Pretty shitty. Really shitty to be exact.”

While 15 different drivers have earned victories so far this season, Sides, Jacob Allen, Sheldon Haudenschild, Kraig Kinser and Brent Marks are still chasing their first win of the year.

However, with more than 40 races left this season, the five drivers are poised to make gains in the final five months.

They’ll get three chances to find that first victory of the season this week on Wednesday, July 3, at Brown County Speedway for the Star Spangled Showdown and on Friday, July 5, and Saturday, July 6, at Cedar Lake Speedway for the FVP Platinum Battery Showdown.


The Series is returning to Brown County Speedway for the first time since 2016. The race will be the first visit to the 1/3-mile speedway for Haudenschild, Kinser and Marks. Although Marks said he feels like he has been good on bull-ring sized tracks this year. His average finish on 1/3-mile tracks this year is 12.25.

He said his biggest issue this season has been putting a full race night together. Last year he would run well in the Feature but didn’t have speed in the early stages of the night. This year it’s the opposite.

“This season I concentrated more on trying to get the car better early in the night,” Marks said. “Doing that, concentrating more on the beginning of the night, we’ve kind of been slacking off toward the end of the night. It’s just a matter of putting everything together.”

He’s failed to transfer to three Features this year, but came close to getting his first win of the season at Nashville Fairgrounds Speedway – a potential win he feels like he let slip away.

Going into Brown County Speedway, Haudenschild said he’ll have to watch videos of the speedway to try and learn what he’ll need to do.

“Definitely with the Outlaws, you have to figure it out quick,” Haudenschild said. “I feel like I do pretty good at that.”

In four races at a 1/3-mile track this year, Haudenschild has two podium finishes and hasn’t finished worse than eighth.

Like Marks, Haudenschild has had a up and down season. He had four wins at this point last year. Haudenschild said he feels like he and his Stenhouse Jr.-Marshall Racing team are still as good as they were last year. Other teams have just gotten better.

“I feel like we’ve got to progress a little bit better, get our car a little bit closer and just get me comfortable and qualify better,” Haudenschild said. “I think with our format; we’ve got to qualify and start up front with them guys. Sometimes we get to the Feature and we’ve got our car figured out, but just a little too late in the night.”

Both Haudenschild and Kinser said they’re looking to find consistency this year and Mother Nature hasn’t helped, raining out 12 of the first 26 races of the season.

Kinser hasn’t won since 2017, but he and his Steve Kinser Racing team have put themselves in contention to win at times this season, winning the DIRTVision Fast Pass Dash and leading laps in the Feature.

“I’m enjoying racing and enjoying getting to tracks right now,” Kinser said. “It’s definitely a good part of the season.”

Sides is looking forward to getting back to Brown County Speedway. When the Series last went to the speedway in 2016, he set the track record and finished fifth in the Feature.

This year, Sides said he’s dug himself into a hole that’s hard to get out of. His biggest issue has been qualifying.

“Seems like we’re always behind at the get go,” Sides said.” With today’s format you have to be on point from Hot Laps on. We need to work on the qualifying part of it, I guess.”

Sides brought in Tim Kaeding as a teammate in select races this year, which has been beneficial to the team, he said. Having Kaeding – who’s finished on the podium and been in contention to win this year – on the team allows provides to opportunity to share notes and set ups. He’s hoping for a successful season with Kaeding.

“If he can have some good runs, that’ll turn the season around,” Sides said.

Jacob Allen is still looking to get his first World of Outlaws win – in more than 250 starts. It’s his main focus. His main goal each race.

He couldn’t say what he needs to do differently to make it happen, other than making sure he continues to put himself in position to be leading at the end of the race.

“I would just say… I don’t know, I haven’t led the right laps,” Allen said. “I’ve led laps. I’ve been up front. I’ve been strong in the races that I have led at. I mean, really, this year, the only one I feel like I’ve had a shot at winning is Devil’s Bowl. I just think I was leading at the wrong time during that race. I just have to keep digging and not give up and put myself in the right can of positions to win.”

Allen has experience at Brown County Speedway, finishing 15th at the 2016 race. And said he is looking forward to Cedar Lake Speedway, where he led laps last year. It’s also where his Shark Racing teammate Logan Schuchart got his first Series win. Allen hopes to be able to do the same.

“We had some good runs last year at Cedar Lake,” Marks said. “We had very a competitive race car both nights. I’m pretty confident heading into that.”

With the experience and success Allen, Haudenschild, Kinser, Marks and Sides have had at Cedar Lake Speedway – and the experience Sides and Allen have at Brown County Speedway – the five drivers could add their name to the 2019 winners list this week.

WHEN & WHERE
Wednesday, July 3, at Brown County Speedway in Aberdeen, S.D. for the Star Spangled Showdown.

ABOUT THE TRACK
Brown County Speedway is a high-banked, 1/3-mile track. The track record is 10.961 sec. set by Jason Sides on June 19, 2016.
Online – BrownCountySpeedway1.com