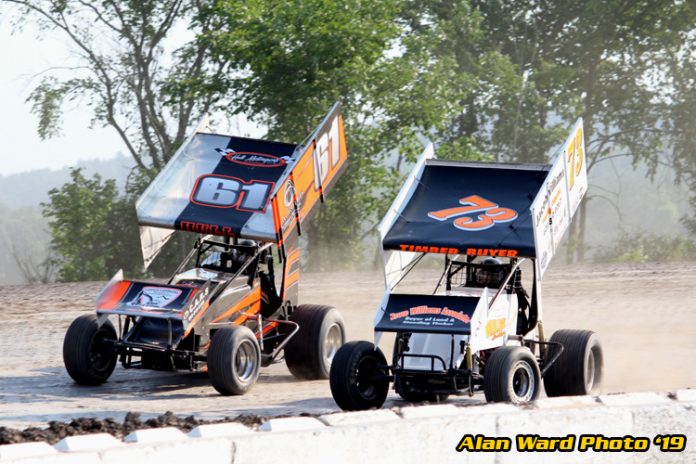 WEST HAVEN, VT – The Green Mountain Gear-Heads Sprint Cars of New England made their second appearance of the season at the famed ½ mile of Devils Bowl Speedway in West Haven, VT, joining all the tracks regular divisions for a spectacular Independence Day Celebration on Wednesday, July 3rd.

Feature time saw Will Hull and Peter Dance bring the field to the green with Peter Dance getting the jump and leading the first lap. Before another lap could be complete the Adam Pierson machine suffered a mechanical failure and rolled to a stop under the flagstand, causing the only caution of the event. When racing resumed this time Floyd Billington got the jump, took the lead and immediately started to distance himself from the rest of the field. Meanwhile pole sitter Will Hull was mired towards the back of the pack after an unplanned excursion off the top of the backstretch. As the race wore on Billington at times possessed almost a half lap lead over second while Hull was on the charge using the high groove. Shortly past the halfway point of the feature Hull had moved to second and Dan Douville to third as the duo looked to reel in the high flying Billington, who had by now reached lapped traffic which was hindering him just a bit. As the laps rapidly clicked off Hull pulled away from Douville and was taking big chunks out of Billington’s lead and with five laps to go it was apparent that Hull would reach Billington before the race concluded. Once Hull caught the 69K of Billington he tried high and low and finally made a high side move on the backstretch that propelled him to the lead coming to the white flag. Billington didn’t go down without a fight however as he made a counter move on the backstretch as well but couldn’t make it stick. At the checkers it was Will Hull with the win, Floyd Billington was second with Dan Douville third. Clay Dow was fourth with Peter Dance fifth.

A very animated Will Hull in victory lane commented that this was a very satisfying win as after his backstretch off track excursion he made it hard on himself but somehow got it done for the win.

The next event on the Green Mountain Gear-Heads Sprint Cars of New England schedule will be Saturday, July 6th at the Bear Ridge Speedway in Bradford, VT