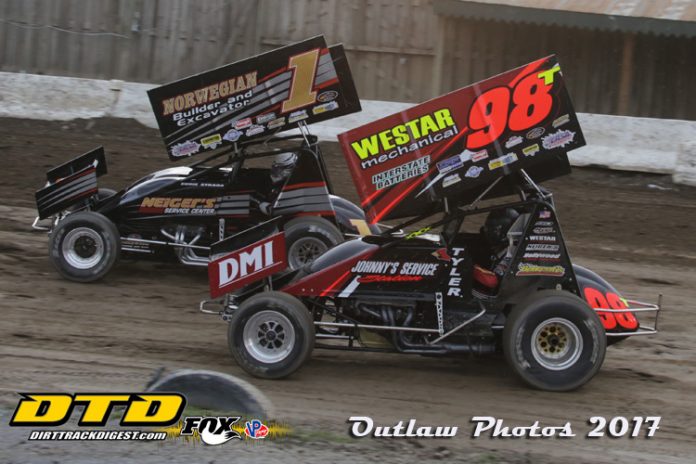 SODUS, NY – The SuperGen Products with Champion Power Equipment CRSA Sprint Car Series returns to action in just under two weeks’ time after about a six-week layoff. The series heads down Interstate 88 to the Afton Motorsports Park on Friday July 12th for the first of two visits this season.

When the series rolls into the smallest of the three fairgrounds facilities on the 14-race schedule, it will kick off a busy month for the winged warriors of the CRSA Sprint Car Series. A total of five events will take the green flag in the second half of the month of July, at five very different tracks.

The first of course is the initial appearance at Afton. One year ago, three events were scheduled at the track with the first being lost to rain just as the teams were set to put heat in their motors and the third was cancelled. The second scheduled event did get in with Tyler Jashembowski picking up his only win of the season over Dana Wagner, Dalton Herrick, Sydney Prince and Dustin Purdy.

The very next day, Sunday July 21st the series heads southeast to the Thunder Mountain Speedway in Center Lisle, New York. The series last visited Thunder Mountain to close out the 2018 season in October as part of the Short Track Super Nationals. Picking up the win was McDonough, New York’s Dalton Herrick over Jashembowski, Trombley, Scott Goodrich and Emily VanInwegen. The event will be sponsored by Country Service Center of Circleville, New York and will pay $750 to win.


Fast forward a few days and the stars and cars of the CRSA head back to where the series began – New York’s Capital District. First, the series will make their first stop of the season at the states oldest active track – the Fonda Speedway. The track, which held its first race in 1914 will see the CRSA invade on Saturday July 27th and will offer $1,000 to the winner. A year ago three events were scheduled with Jeff Trombley, Josh Pieniazek and Mother Nature picking up the wins.

The month will end with the second and final appearance of the 2019 season at the CRSA’s original home track – the Glen Ridge Motorsports Park. The Ridge first welcomed the CRSA Sprint Car Series on Sunday June 2nd and will play host to round number eight of the overall season. Like the first event and the event at Fonda the night before, the July 28th event will be part of the Kennedy’s of Troy Northway 90 Mini-Series. The June 2nd event saw Cory Sparks pick up the win over VanInwegen and Trombley.