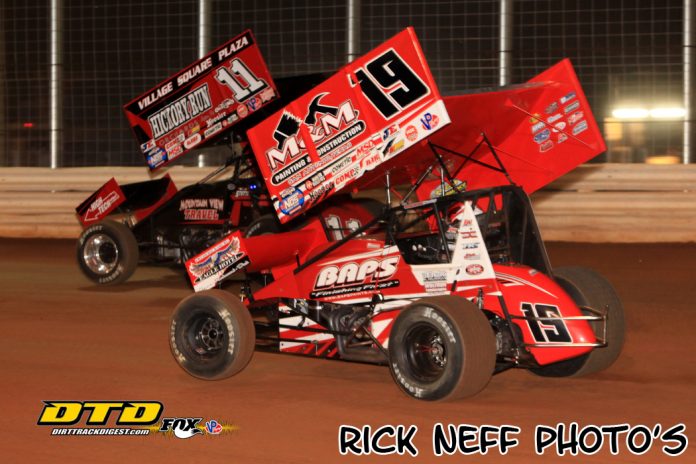 WILMOT, WI – A year after the World of Outlaws NOS Energy Drink Sprint Car Series’ race at Wilmot Raceway, Wisconsin-natives are still talking about the event. About the driver who picked up his first win with a seven second lead and came close to putting eighth-place Donny Schatz a lap down.

That driver was Myerstown, Penn.-native Brent Marks, and he’s hoping to keep people talking with another win at the raceway on Saturday.

“I think I pulled up a pretty big fan base after that weekend,” Marks said. “It seems like every time we come back to Wisconsin people are still talking about that.”

Marks’ first win at Wilmot led to two more victories last year. He’s been winless since his last win at Eldora Speedway in September, though.

This year has been filled with highs and lows for Marks. He came close to picking up his fourth career World of Outlaws victory at Nashville Fairgrounds Speedway in June, but a late race mistake forced him to settle for second. He’s failed to transfer to four Features this year, but at the start of July got two more provisionals to use for the remainder of the season. And lately, he’s been building momentum with strong runs.


Marks originally hadn’t transferred to the Feature for the final night of the Jackson Nationals, but due to a car being disqualified before the start of the race, and Marks being the first alternate, he was able to get on track before the initial start. He made the most of the opportunity by charging from 24th to 14th.

He then backed that performance up with two fourth-place finishes in-a-row – earning the Hard Charger award at Cedar Lake Speedway for going from 16th to fourth.

Now, Marks is looking to turn his good runs into wins. Before returning to Wilmot, Marks’ next shot at another victory will be at Hartford Speedway in Hartford, Mich. on Friday, July 12.

“I’m excited to head there and see what it’s all about,” Marks said. “We don’t get to race in Michigan too often, so any time I get to go there I think it’s good for us drivers and the Series.”

The World of Outlaws have raced on the current 3/8-mile configuration of Hartford Speedway once in 2017. Marks fared well, though, finishing fourth.

He enjoys going to new tracks and ones the Series hasn’t been to in a while. It puts everyone on an even playing ground, he said.

“When I first started racing with the Outlaws, it was kind of nice (going to a newer track) because you don’t have to one up yourself from the year before,” Marks said. “Kind of start with a clean slate and go from there. That showed this year with some tracks we haven’t been to in a while or new ones like Nashville this year. Just kind of evens everybody up.”

He’s had success recently on new tracks and ones the Series hasn’t been to in a few years with his fourth-place finish at Brown County Speedway and runner-up finish at Nashville Fairgrounds Speedway.

His first start at Wilmot Raceway, in Wilmot, Wis. was also kind to him with a 10th-place run.

“I’ve actually always enjoyed Wilmot, even though I haven’t raced there that much,” Marks said. “It just seems to fit my driving style a little bit. It’s fun. It’s kind of tight. You can maneuver around. Close quarters racing. I think it’s a fun track and I enjoy racing there.”

After securing the win at the 1/3-mile track last year, the weight of the world fell off his shoulders. He could finally check winning his first World of Outlaws race off his list of goals.

“It meant everything, really,” Marks said. “I had been working on getting an Outlaw win for a long time. I always figured it would happen on my home turf in Pennsylvania, but to be able to do it outside of PA and just be able to do it in general is pretty amazing.”

Racing with the World of Outlaws requires patience, Marks said. Patience and smart decisions on track. Those two traits led him to his first win last and he’s hoping they will lead to his first win of the season this year.

WHEN & WHERE
Friday, July 12, at Hartford Speedway in Hartford, Mich. for the Battle of Michigan.

Saturday, July 13, at Wilmot Raceway in Wilmot, Wis. for the Badger 40.

Tickets can also be purchased by going to WorldofOutlaws.com/tix or by calling 844-DIRT-TIX.