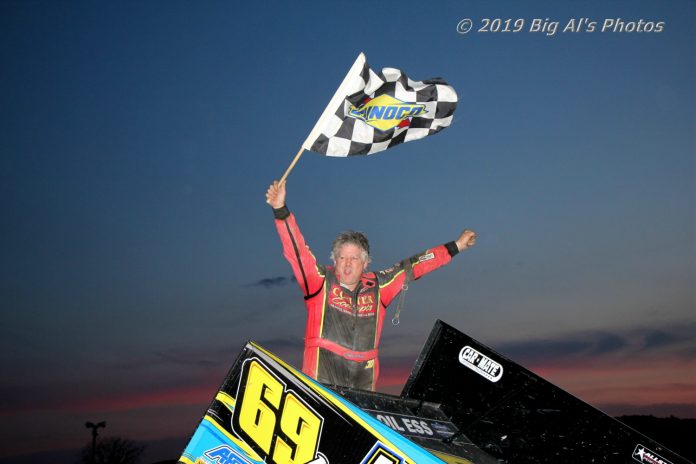 FAIR HAVEN, VT – The Green Mountain Gear-Heads Sprint Cars of New England rolled into the Devils Bowl Speedway for the third time this season on Browns Slate & Quarries night July 14th to find a nice racing surface with some grip.

In the Heat races the lead was not the place to be as in the first heat Chris Donnelly was leading by a healthy margin with 2 laps to go when he encountered motor issues and shut down, handing the lead to Jordan Fornwalt who took the FK Rod Ends heat win. The second heat race saw Clay Dow bolt to the lead and also shut down coming to the white flag, he was victim of a broken throttle linkage, this handed the O’Reilly Auto Parts heat win to Will Hull.

Come Feature time as the field rolled off both Jordan Fornwalt and Adam Pierson encountered mechanical issues and had to be pushed to the pits, not able to start the event. When the green flag did fly Floyd Billington immediately bolted to the lead and started to steadily pull away from the field with Mike Kondrat settling into a comfortable second and Rick Stone third. The battle was for fourth as Kurt Conklin and Will Hull swapped the spot a few times. As the event reached the halfway point Rick Stone started to fade and just a lap later he suffered a mechanical failure and flew off the top of turn 1, somersaulting through the trees and bushes and landed in the field adjacent to the track, he was uninjured in the spectacular looking incident. When racing resumed Billington, who had nearly a half lap lead when the Red flag appeared for Stone, once again jumped to a healthy lead as Mike Kondrat got high into turn one and both Conklin and Hull motored by with Clay Dow also moving past Kondrat a couple of laps later. That is how they would take the checkers with Floyd Billington taking an impressive win. Kurt Conklin had what was easily his best run of season finishing second with Will Hull third. Clay Dow and Mike Kondrat completed the top five.

In victory lane an elated Floyd Billington said that win helped to take the sting out of getting passed on the last lap for the win last that SCoNE was at Devils Bowl and he also thanked the track for a very raceable surface.

The next event on the Green Mountain Gear-Heads Sprint Cars of New England schedule will be Saturday, July 20th at the RumTown Speedway in Wentworth, NH.