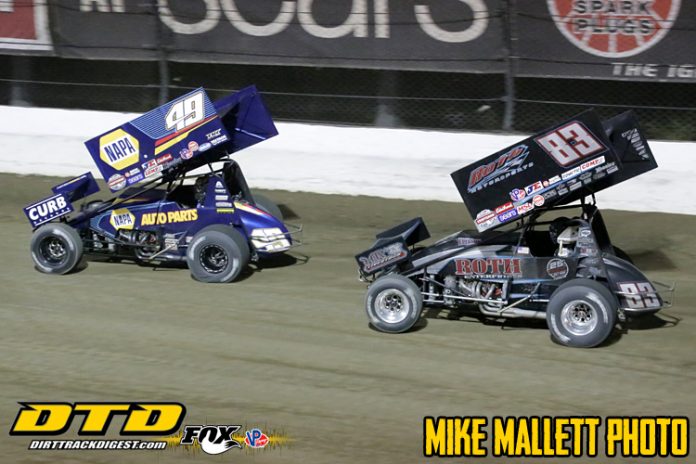 CONCORD, NC — Brad Sweet’s yell projected an octave higher than previous victory chants after winning at the Jackson Motorplex. Not only did he claim the Jackson Nationals, but the large $41,000 payday along with it.

The passion to win is instilled in all drivers, but when large paydays are on the line that passion reaches a new height. It was apparent in Sweet’s charge to win the Jackson Nationals and in Shane Stewart’s relentless pursuit of the $25,000 payday at Nashville Fairgrounds in June.

That passion is sure to be on display for the next couple of months in the World of Outlaws NOS Energy Drink Sprint Car Series schedule with more than $500,000 on the line just to win and more than $2 million at stake overall.

There are six races throughout the two months paying $20,000 or more to win, starting with the unprecedented $175,000-to-win Kings Royal at Eldora Speedway in Rossburg, Ohio, on July 20. The payout is a drastic increase from the $50,000-to-win purse the event has had since it started in 1984.

On July 16 is the Brad Doty Classic at Attica Raceway Park in Attica, Ohio. Then the three races at Eldora Speedway leading up to the Kings Royal — #LetsRaceTwo, Jokers Wild and the Knight Before the Kings Royal, the sole $12,000-to-win event.

“It’s a great week to be able to run the Brad Doty on Tuesday and then four nights in-a-row at Eldora,” Daryn Pittman said. “One hundred and seventy-five (thousand dollars), that’ll change anyone’s year.”

Following the Kings Royal is the biggest weekday show of the year on Tuesday, July 23, the $25,000-to-win, $1,200-to-start Don Martin Memorial Silver Cup at Lernerville Speedway in Sarver, Pa.

Immediately following the Silver Cup is the July 26-27 Champion Racing Oil Summer Nationals doubleheader at Williams Grove Speedway in Mechanicsburg, Pa. There will be $28,000 on the line to win between the two nights — $8,000-to-win the first night and $20,000-to-win the second.

Drivers will, again, have the chance to earn another $28,000 the next weekend with the Aug. 2-3 Ironman event at Federated Auto Parts Raceway at I-55 in Pevely, Mo. Friday’s Night Before the Ironman event will pay $8,000-to-win, while the main event on Saturday will pay $20,000-to-win.

Then, less than a month after the Kings Royal, drivers will find themselves battling to win another high-paying prestigious event – the Knoxville Nationals in Knoxville, Iowa.

From Wednesday, Aug. 7, to Friday, Aug. 9, drivers will compete for more than $30,000-to-win in the three preliminary races. Then on Saturday, Aug. 10, the passion to win will hit its zenith. Drivers will be competing for the illustrious Knoxville Nationals champion title and the extravagant $150,000 payday.

A string of $10,000-to-win races follow the Nationals. Until Friday, Aug. 23, when the World of Outlaws return to Black Hills Speedway in Rapid City, S.D. for the NOS Energy Drink Rushmore Showdown. The purse will be $20,000-to-win, thanks in part to NOS Energy Drink sponsoring the event this year and adding another $10,000 to the winning purse.

By the end of August, one driver could potentially end the summer swing of races with more than $500,000. It’ll be a challenging task, but there’s no doubt every driver’s passion to win will be peaked at each event.

“This is what it’s all about as a race car driver is the big money races,” Brad Sweet said. “It’s great our sport has so many big paying races and they’re all coming up.”

Tickets can be purchased by going to WorldofOutlaws.com/tix or by calling 844-DIRT-TIX. As always, if you can’t make it to the track watch every lap LIVE on DIRTVision.com.