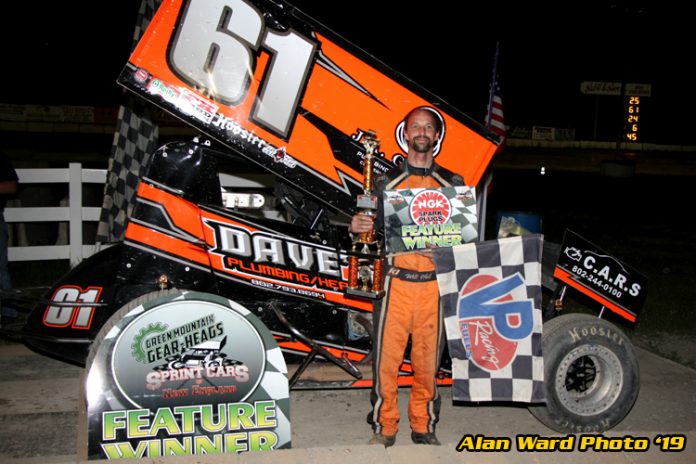 The Green Mountain Gear-Heads Sprint Cars of New England once again appeared at Bear Ridge Speedway on July 27th; making up an event rained out earlier in the season and found a multi groove racy track come feature time which resulted in a fast caution free event.

When the feature rolled off Kurt Conklin and Mark Cole made up the front row with Conklin getting the jump when the green flew. Conklin immediately pulled away from the field, building a healthy lead in the first couple of laps with Mark Cole running comfortably in second with Clay Dow third. As the race hit the nine lap mark Will Hull was on the move, taking the third spot from Dow and started to rapidly close the gap on Cole. By lap twelve Hull was challenging Cole for second and made his way into second two laps later. It took Will Hull only two more laps to catch Conklin and make the pass for the lead. Shortly after Hull took the top spot Chris Donnelly passed Cole for third and looked to garner second from Conklin. It only took Donnelly one more lap to dispose of Conklin moving to second and looking to reel in Will Hull. Mark Cole also took advantage of the fading Conklin to take the third spot as the two lap indicator was displayed by the flagman. At the checkers it was Will Hull with the win, Chris Donnelly was second with Mark Cole third. Kurt Conklin and Clay Dow completed the top five.

The next event on the Green Mountain Gear-Heads Sprint Cars of New England schedule will be Saturday, August 3rd, once again at the Bear Ridge Speedway in Bradford, VT.