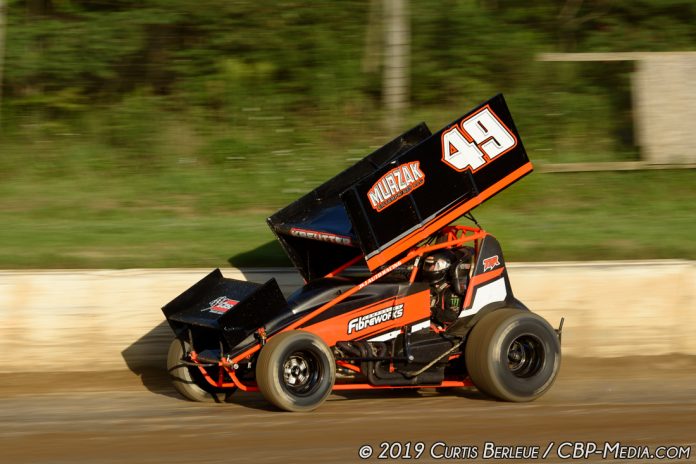 HAMMETT, PA – If there is one race track that Scott Kreutter is always excited to get back too, it is the Eriez Speedway. He backed that excitement up by scoring his fourth win at the speedway and his eighth overall with the Patriot Sprint Tour.

“The car was really good tonight” Kreutter opened his victory lane speech up with. “I had no idea where [Davie] Franek and [Joe] Trenca were so I was just doing the best that I could, trying to be patient, when it gets real slick like that, you have to have a lot of patience.”

Kreutter would start on the pole alongside Joe Trenca as the two brought the 24-car field to the green flag. Kreutter would pull away early with Davie Franek immediately getting by Trenca for second. Fifth starter Jared Zimbardi would also get himself in the mix for the race lead but lost power heading into turn four for on lap three.

Zimbardi would utilize his two-minute work area option and his team was able to make repairs and get back onto the race-track before time elapsed. Zimbardi would fight back for a 12th place finish.

On the ensuing restart, Kreutter would not get away as convincingly this time with Franek riding his tail tank down the back stretch. Franek would enter low with Kreutter riding the middle groove of the race track and the two would battle for the lead in turns one and two. However, another caution would come out for Pete Richardson who would lose power steering in his car on lap five.


Richardson was able to get back out but the repairs the team made would not suffice and he would immediately pull it pit side prior to the green flag coming back out.

Kreutter had a much better restart this time and was able to pull away to nearly a ten car length lead. Kreutter would meet lap traffic on lap 11 which allowed Franek to close the gap with about 12 laps to go.

Kreutter would maintain his composure however and pick off lap cars as laps would click away. Kreutter would check out again with Franek now having to fend off Joe Trenca who had a late race surge.

In the end, Kreutter would lead all 25 laps and pick up the win over Franek, Trenca, Randy Hannagan and Jordan Thomas. It was a great cap off for Kreutter Sunday night after a not so good start to his weekend.

“I was really disappointed Friday night, I thought we had a win at Ohsweken” Kreutter continued. ”Then last night at Mercer we got buried but I am really happy for this Hoddick team, everyone puts a lot of time into this, a lot of dedication, these wins are hard to come by.”

Davie Franek is progressing back to regular form by getting back on the podium for the first time since July 12. He had to settle for second but he will take it and move on.

“I tried to make good laps, I don’t know if I had the wrong line or something” Franek said. “I felt like I was losing a lot of time in three and four. However, second place does make the seven hour tow back to Jersey a little bit easier.”

Joe Trenca was happy to get back on the podium after a not so good race the night before.

“Starting second and to fall back a position does not feel good” Trenca said.

“But we found something before the feature that we think has been hurting us and the car has been a lot better.”

The Patriot Sprint Tour would like thank the NRA Sprint Invaders and their teams for traveling this weekend to Western PA, the staff from PST looks forward to working this great organization for many years to come.

The series will be idle this coming weekend but will return to Woodhull Raceway for the third time in 2019. After Woodhull will be the inaugural New York Nationals at Land of Legends Raceway. It is a two day show with the second day paying $5,000 to the winner.