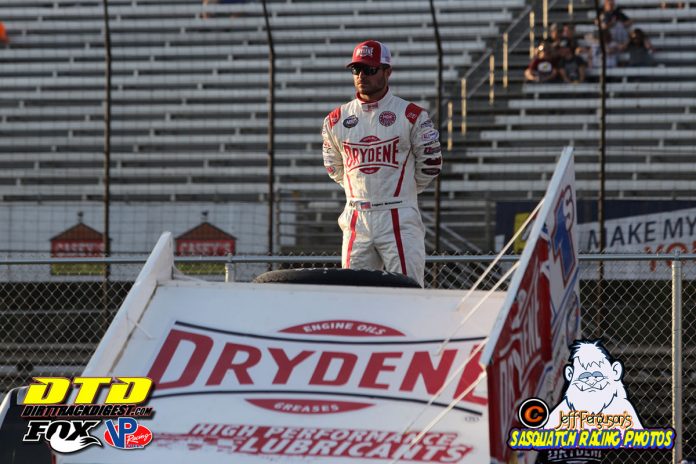 GRAND FORKS, ND – There are several ways to leave the Knoxville Nationals after preparing for it all season long, according to Daryn Pittman.

One way is to leave wanting a month off and to never see a race car again.

The other – the way Pittman, Logan Schuchart and David Gravel feel – is to move onto the next race – River Cities Speedway on Aug. 16 and Red River Valley Speedway on Aug. 17 – eager to keep the momentum of a good finish going.

The trio had their best Knoxville Nationals performance this year. Gravel dominated the prestigious event, winning his first Knoxville Nationals title. Schuchart charged from 22nd to second in the 50-lap race. And Pittman challenged Gravel for the lead in the late stage of the race before settling for a third-place finish – his first podium at the event.

“I mean, let’s keep this ball rolling,” Gravel said. “Brad (Sweet) won the Nationals and came on pretty strong last year. Hopefully we can do the same. We’re going to keep working hard. We’ve got a good balance lately. The last couple of months have been great. Let’s keep this thing rolling and make it interesting.”

Now, after winning the biggest race of the year in his first year with Jason Johnson Racing – giving the team it’s second Knoxville Nationals victory – Gravel said he needs to keep his focus for the remaining races. A strong finish in the Series points is important to he and JJR.

His goal is to stay relevant. Stay competitive. And be consistent.

“You know, those guys (Schatz and Sweet) are out a little bit on us,” Gravel said. “If we just keep them honest, that’s all I can ask for. To win a championship is really, really hard. First year team, we’re in a unique situation with everything that happened. We learn and get better every week. Every day we continue to learn and hopefully have a little bit of time to keep getting better and keep doing great things.”

They’ll look to do that this weekend at the North Dakota doubleheader. Gravel set Quick Time – one of his 12 Quick Times this year – at River Cities Speedway in June and finished fifth in the race. He was in contention to win at Red River Valley Speedway last year, but blew a tire with six laps to go – the win went to Schatz.

“Those are tough race tracks,” Gravel said. “Grand Forks is interesting. Red River Valley I got a flat last year after running good. We’ll just take it one race at a time.”

The last time Schuchart was at River Cities Speedway he parked his Shark Racing car in Victory Lane. He’s yet to return to the winner’s circle since. His plan is to change that this weekend.

“I want to get a win,” Schuchart said, after finishing second for the sixth time this year since winning at River Cities. “We’ve fallen into a little bit of a slump. We’ve had a lot of chances to win races and some second-place finishes in between. I want to be back on that winner’s circle and be back in Victory Lane where it belongs.”

He and his team are riding the high of an incredible Knoxville Nationals performance. After a poor showing on their preliminary Qualifying night, they rebuilt an old car, transferred into the Feature with a runner-up finish in the “Hard Knox” race and passed 20 cars in the National’s Feature. Schuchart contributed that run to confidence.

It’s what he and his team will look to rely on going forward.

“I don’t really feel like you change your game plan,” Schuchart said. “It gives you confidence. Your guys have confidence. That’s important. Sometimes a lot of things are in your head.

“We changed a car this week. I don’t really think there’s much of a difference in them. Some people might. I don’t. I believe if you set two cars up the same way they’re going to be the same race car. Especially if they’re new. But if it’s a confidence thing and it makes the driver feel better and the crew guys feel better, the race team feel better, I’m all about positive vibes. I believe if everybody is happy and they’re feeling good about the race car good things are going to happen.”

Schuchart finished second in the Nationals with a last lap pass on Pittman, who had to slow up for a lapped car. Pittman was upset that he lost the position due to a slower car but couldn’t deny the joy of he and his team’s performance.

Pittman hasn’t won a World of Outlaws race since winning the two season opening races at Volusia Speedway Park. However, he’s finished on the podium in the last two Series Features and brought Roth Motorsports back to Victory Lane at Southern Iowa Speedway last week.

“We’ve just been up and down,” Pittman said. “The truth is I feel like I need some help with my race car, as far as making decisions. I’d like to go back to focusing on driving rather than set up. Hopefully we can make something happen and relieve some stress from me.”

The help he is looking for could be the addition of a crew chief to the team – a role Pittman had mostly taken upon himself.

“My guys work really hard and they do a great job,” Pittman said. “But to try and compete with the three teams that are dominating – between David and Brad and Donny – at the end of the day I just don’t think I’m good enough. At the end of the day, if we can get some help, I know I can drive, but I think if we can get a little bit of help in there, I think it would be a big deal.”

He’s happy to have the week to put the focus and stress of the Knoxville Nationals out of his mind, but Pittman said he’s also ready to head to North Dakota and get back racing.

“I feel like these next several races are where we come alive,” he said. “I always love this trip. It’s beautiful part of the country. Wind down a bit and try to get another win for Dennis (Roth) here really soon.”

WHEN & WHERE
Friday, Aug. 16, at River Cities Speedway in Grand Forks, N.D. for the Second Leg of the Northern Tour. Get tickets and more information.

Saturday, Aug. 17, at Red River Valley Speedway in West Fargo, N.D. for the Duel in the Dakotas. Get tickets and more information.

3/10 and 3/8-MILE WINNERS THIS YEAR
There has been one race on a 3/10-mile track, so far, this year.
River Cities Speedway: Logan Schuchart won on June 7