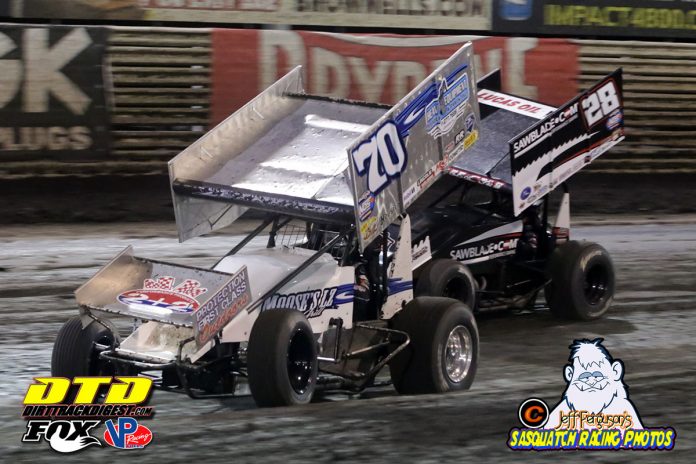 BROWNSBURG, IN – It has been nearly three weeks since Tony Stewart’s Ollie’s Bargain Outlet All Star Circuit of Champions presented by Mobil 1 participated in scheduled competition, but despite the break, the traveling aces are ready for action and will hit the road once again, this time setting aim on a doubleheader in Michigan and Indiana.

Led by defending All Star Circuit of Champions titleholder and current Series point leader, Aaron Reutzel, the traveling All Stars will kick-off the weekend on Friday night, August 16, with a visit to I-96 Speedway in Lake Odessa, Michigan. Not stopping there, the Series will venture roughly two and a half hours south for a one night stand at Plymouth Speedway in Plymouth, Indiana, on Saturday, August 17. Incidentally, the visits to Michigan and Indiana, respectively, will be a first and only for Tony Stewart’s All Stars in 2019. In addition, each round will award $5,000 top prizes.

Joining Reutzel on the All Star campaign trail will be a stout contingent of Series full-timers including six-time champion and all-time Series win leader, Dale Blaney, who trails Reutzel by a mere-eight markers in the driver title chase. Rudeen Racing’s Cory Eliason will also be in attendance, as well as Paul McMahan, Brock Zearfoss, Greg Wilson, Gerard McIntyre, Skylar Gee, and George Hobaugh.

Although Series full-timers experienced a break from All Star commitments, most did not take any time off. In fact, the All Star Circuit of Champions were represented well during the 59th running of the Knoxville Nationals in Knoxville, Iowa. Aaron Reutzel, Cory Eliason, and Paul McMahan each qualified for A-Main competition at Knoxville Raceway with Reutzel leading representation with a fifth place performance; Eliason and McMahan finished 13th and 20th, respectively.

Those unable to make the journey to I-96 Speedway and Plymouth Speedway can still watch every lap of action live from the comfort of their own home. Speed Shift TV, the official online broadcast partner of the All Star Circuit of Champions, will be on hand to capture action from both events. Those wanting to learn more about viewing options should visit Speed Shift TV online at www.speedshifttv.com.

I-96 Speedway in Lake Odessa, Michigan, will open pit gates at 3:30 p.m. on Friday, August 16. A mandatory All Star drivers meeting will take shape at 5:15 p.m., followed by hot laps at 6. Those seeking additional news and notes should visit I-96 Speedway on the Web at www.i96speedway.com.

Plymouth Speedway in Plymouth, Indiana, will open pit gates at 2 p.m. on Saturday, August 17. A mandatory All Star drivers meeting will take shape at 5:30 p.m., followed by hot laps at 6:30 p.m., sharp. Those wanting to learn more should visit Plymouth Speedway online at www.plymouthspeedway.net.