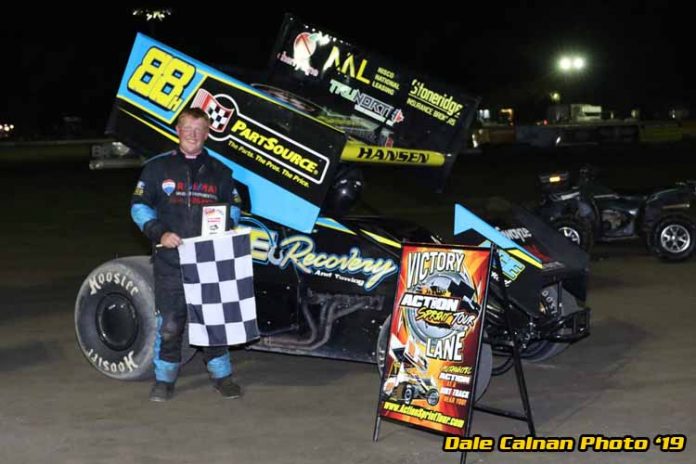 BRIGHTON, ONT – Josh Hansen executed a perfect slidejob in turns one and two to take the lead from Jordan Hill on lap eight of the Action Sprint Tour powered by RaceRivalz.com’s 20-lap Feature and led the final 13 laps to score his third win of the season during the sophomore tour’s lone stop of the season at Brighton Speedway on Saturday night. A total of 22 competitors made the trip to the most eastern stop on the schedule for the tour.

When the green flag dropped, it was Hill and Hansen who brought the field of cars that lined-up 11 rows deep up to speed for the main event of the night. Hill and Hansen broke away from third-place DJ Chrisite early on before they were slowed by a lap three caution when Brian Nanticoke spun over the banking in turn two. On the ensuing single-file restart, Hill led Hansen, Christie and sixth-starting Steven Beckett back to action.

Hill led the next four laps, while Hansen was all over the tail tank of the No.28 as he tried to find a way to the top spot. Behind the leaders, local driver Brandon Murrell and Ryan Hunsinger were embroiled in a tight side-by-side battle for fifth over several laps, with Hunsinger eventually retaining the spot.

Then on lap eight, Hansen stalked Hill down the front straightaway and dove underneath him in turn one before sliding up in front of him at the exit of turn two to drive off with the lead. However, as the race continued to run under green flag conditions, Hill stayed within five car lengths of the leader as he worked into lapped traffic. With five laps to go, Hill was within striking distance and was waiting for the opportunity to arise where he could use the slower cars to his advantage and steal the lead back from the No.88h.

That opportunity nearly came with two laps to go before the second and final caution flag of the night came with 19 laps complete when Allan Downey spun in turn four, just as the leaders were working through turn three and four to collect the checkered flag. Instead, it setup a one-lap dash to the finish. Hansen got an excellent restart to open a three car-length advantage. On the final two corners, Hill offered every bit of momentum he had to try and slide in front of Hansen, but ran out of time and room and Hansen drove to the victory.

Following Hill onto the podium was DJ Christie in third. On the final restart, Lucas Smith got by Beckett to finish fourth and claim the night’s hard charger award in the process after driving from the 11th starting spot to a top-five finish.

Christie, Hill and Beckett were heat race winners to begin the night and transferred to the redraw for the top-six finishers along with runner-up drivers Ryan Hunsinger, Spencer Davis and Hansen. Hill drew the pole for the main event while Hansen was the last driver to pull and drew the outside of the front row.

The Action Sprint Tour will wrap-up its 2019 season with round 10 and crown a new champion during the Canadian Sprint Car Nationals at Ohsweken Speedway on September 14. Race time will be 7:30pm. For more information on the Action Sprint Tour, including a full break down of the Series’ 2019 point fund and race purses as well as series rules, visit www.ActionSprintTour.com.


ACTION SPRINT TOUR MEDIA
Website: www.ActionSprintTour.com
Facebook: www.facebook.com/ActionSprintTour
Twitter: @ActionSprints
About the Action Sprint Tour: The Action Sprint Tour is a travelling Winged Sprint Car Series based in Ontario, Canada. The cars on the Action Sprint Tour are powered by GMC 602 Crate Motors modified specifically to fit a Sprint Car chassis. The Series ran its inaugural season in 2018 and in 2019 will run 10 races at five different Ontario tracks. Drivers will compete for a point fund and bonuses totaling $10,000. For additional information, including rules, event purse and series point fund, visit the Action Sprint Tour official website at www.ActionSprintTour.com.
About RaceRivalz.com: The RaceRivalz.com mission is to enhance the fan experience of all things competitive and provide event promoters and sanctioning bodies a valuable and intriguing social media tool by engaging the audience through providing games of skill and chance at various events. RaceRivalz.com provides an opportunity to fans to earn amazing prizes while gaining a greater connection to their passions. It also offers an opportunity to promoters and sanctioning bodies to earn that same connection to their audience. For more information, visit RaceRivalz.com.