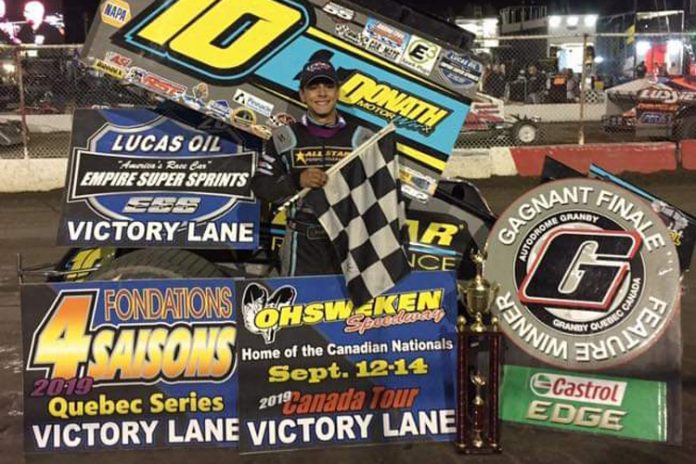 GRANBY, PQ – With the closing stages of the Lucas Oil Empire Super Sprints (ESS) A-Main at Quebec’s Autodrome Granby playing out, it looked like Jason Barney was set to pick up win #3 in the 2019 campaign. A combination of lapped traffic and charging track conditions saw Paulie Colagiovanni slip by with two laps to go to pick up his seventh win on the tour.

The 18-year-old and current overall ESS point leader is showing that he is comfortable on all size of tracks and all types of conditions. The Granby half mile was lightning quick early on in the Mach 1 Chassis A-Main but then saw conditions change drastically in the final laps.

“The track changed in the end, I moved my car around and found some better lines to run out there,” said the calm teenager, “I really got quick off of two down low where Jason just stayed high. That’s where I made the most ground.”

Still, when you looked at the distance with about five laps to go, Barney looked to have enough of an advantage to the checkers. “He (Jason) was out there, I wasn’t sure if could catch him but I was running the car as hard as I could,” Colagiovanni continued, “I think being second definitely helped, as the track slicked off I could move around where he really couldn’t. To win with a late race pass is pretty cool.”


As you could imagine Barney was somewhat dejected, “This one is tough, I had a real good car all night and thought I was in the best lane. But, as it turns out it wasn’t,” he went on, “I was low and Alex (Vigneault) went by me up top. When he had is misfortune I went up there thinking that was the fast groove.

“When you lead you just don’t want to experiment too much on moving around, especially when you are comfortable,” Jason reflecting on his run, “As it turned out there were some better lines. It’s racing, Paulie is running good. I have to thank my guys for giving me a good piece. We will be back, I want a win here. I have a goal to get one win at every track ESS visits and Granby is one and man, I have been close here. We will get it.”

When the top three took to victory lane, the loudest roar from the huge Granby crowd was for sprint car rookie and local favorite Bryan Cloutier. In only a handful of runs, he put himself on the front stretch at the end and to say he was elated would be an understatement.

“Wow! I just can’t believe this race. To finish third with ESS is just amazing,” said the young drive with a big smile. “The track was real fast but I had such a good car. We didn’t change anything from hot laps to A-Main. It was all a basic Mach 1 setup that Mark Smith gave us.”

While Cloutier is new to sprints, he does have many laps around the Granby oval which proves key. “I have driven here but I don’t always do well. Tonight I felt so good out there,” he said with help of a translator, “I just can’t believe it.”

Alex Vigneault drew the pole and gave up the lead early to Barney. His high line saw him sweep back around the #87 only to come up to slower traffic and in a move to go around his car made contact with the wall and go upside down. He was fine. Chuck Hebing also found his way on his wing and he too walked away.

Billy VanInwegen and Steve Poirier rounded out the top five, the next five were made up of Jordan Poirier, Jeff Cook, Shawn Donath, Matt Tanner and Alain Bergeron