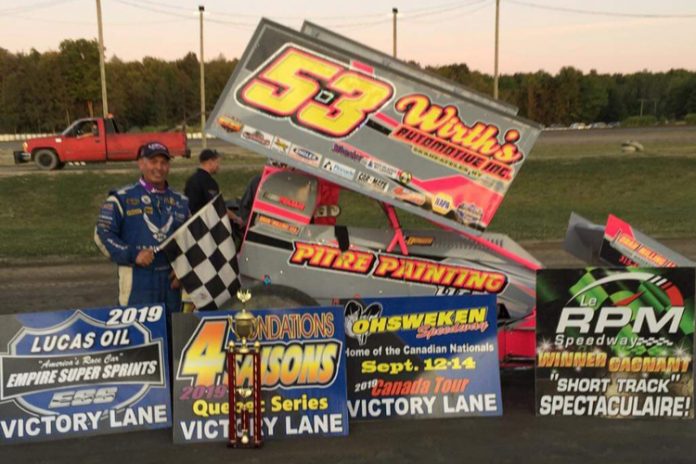 ST. MARCEL, PQ – Shawn Donath has been close to collecting a Lucas Oil Empire Super Sprints (ESS) A-Main in 2019. There have been several different reasons why it hasn’t happened but the South Onondaga, NY veteran can put those aside.

Taking the lead on a lap 22 restart from Matt Tanner, he went on to take home $2,060 for winning the Mach 1 Chassis A-Main, Ohsweken Speedway Canada Tour and Fondations 4 Saisons Quebec Series event. The win was Donath’s eighth career on the tour.

By virtue of his third-place finish, Jordan Poirier narrowly edged Paulie Colagiovanni for the Quebec Series title. His first of any kind with ESS. For Colagiovanni, he just had to show up at Ohsweken’s Canadian Sprint Car Nationals and Brockville’s Fall Nationals to clinch the Canada Tour title.

For Donath, the win was a relief. “It feels good to finally put it in victory lane. The guys work so hard on this car and I have some many great people that sponsor and help me. This win is really for them, I just get to drive,” Donath noted, “We have had a good car at most of the races and have been close. But, it just didn’t come together. Tonight, it did.”


The 25 lap A-Main did come down to that final restart. “The restart before I switched to the bottom and that wasn’t the right move. Matt got me,” Shawn telling about the closing laps. “That though helped me. When the yellow came back out and he took the top I knew what not to do so I wouldn’t get so loose like I did before. The car just launched off the bottom and it was just enough.”

The last three laps saw Donath pull out a slight advantage to take the win in front of a record crowd for ESS’ visit to RPM. Tanner came home second but was disappointed the checkers didn’t fly over his #90.

“When I got Shawn on that restart I knew to take the top when the last yellow came out,” Tanner said, “He just got the lead back on the last one. I was hoping to get the win but it just didn’t turn out that way.”

For Poirier, the Quebec Series title adds the family name to another part of the ESS record book. “This feels good to win a point title with ESS, there are so many good cars and to win one is special,” Jordan continued, “I didn’t know I actually won it. I saw Paulie have troubles but he had a pretty good point lead. We got a little lucky.”

The A-Main had its excitement right at the drop of the green flag when the front row of Chuck Hebing and Steve Poirier made contact causing for cars to get together. Poirier went off on the hock as did Billy VanInwegen. Hebing and Chris Jones would retire shortly after with damage.