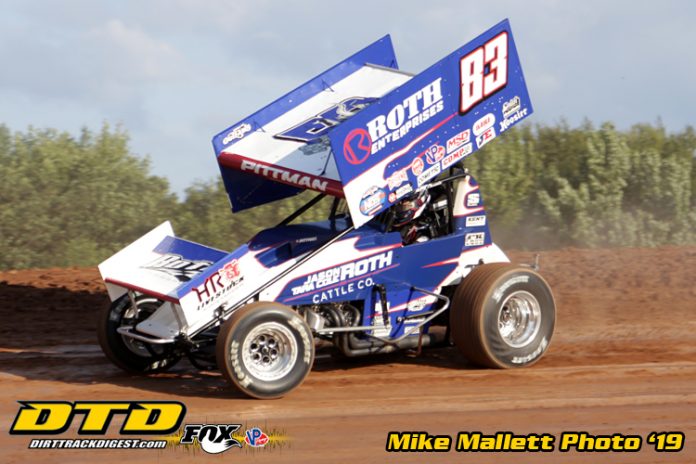 “That’s pretty cool,” Pittman said. “That’ll take a little while to sink in.”

Smith had two wins at Grays Harbor. Pittman’s victory was his first at the raceway, and his third win of the 2019 season with Roth Motorsports.

It took seven months – since his 83rd win in February – and 30 grueling laps around 3/8-mile raceway to get win number 84.

He put himself in position to get the victory by first winning his Drydene Heat race and then finishing second in the DIRTVision Fast Pass Dash behind fellow Oklahoma driver Shane Stewart. Like Pittman, Stewart was eager for another win – having not won since June.

Their desperation to hold the checkered flag again manifested in the first three laps. They drag raced past the soaring green flag; their bumpers aligned. Sailing into turn one, Stewart went low, Pittman high. The Killer Instinct Crossbows No. 5 car edged Pittman by half a car into the corner and on exit.

Carrying more momentum off turn two, Pittman crept his way alongside Stewart down the backstretch. Before entering turn three the two almost made contact forcing Pittman to halt his run. The lead was now in Stewart’s control.

Pittman had let too many victories slip through his fingers. He wasn’t going to let another opportunity drive away. He powered back to the outside of Stewart in turn one and kept alongside him down the backstretch.

Knowing Pittman was there, Stewart launched his car to the bottom of the track in turn three. Pittman stayed high, allowing himself to build momentum around the top and dive underneath Stewart on the exit of the turn. They again drag raced side by side down the front stretch. When turn one approached, Pittman stayed in the throttle, darting past Stewart for the lead on Lap 3.

The Roth Enterprises No. 83 car then began to pull away. However, a few laps later Pittman slid out of the racing groove into loose dirt in turn two, sending his car sideways. Dancing with the throttle and steering wheel, he worked his way out of the mistake. But Stewart was now back within striking distance.

On Lap 11 Stewart was side by side with Pittman due to a caution for a slowing Jason Sides. When the race restarted, Pittman accelerated back in front of the field. Stewart was no longer behind him, though. An aggressive Carson Macedo snuck his way by Jacob Allen and Stewart on the restart to move into second.

The rookie wasn’t able to keep pace with the determined veteran. Pittman pulled away to a comfortable lead. On Lap 19 he was again forced to give it up. Stewart came to a stop in turn four due to power steering issues and brought out the caution.

On the restart, Macedo gave Pittman a scare. The California-native stayed with him down the front stretch and held onto his bumper down the backstretch before diving underneath the No. 83 car into turn three. The high side continued to favor Pittman, though. He used the available grip to launch ahead of Macedo and maintain his throne as the leader.

“I gave away a chance at winning forty grand at Jackson (Motorplex) by choosing the outside, and trust me that’s haunted me for a while and the next race I’m going to lose by choosing the inside, and I told myself that,” Pittman said. “Won the first restart against Shane and never saw him and Carson scared the crap out of me there on the last one.”

With Pittman pulling away to more than a second lead, Macedo had to turn his attention to fending off 10-time Series champion Donny Schatz. The reigning champion worked his way around Macedo for second on Lap 23, but the Kyle Larson Racing driver was ready for a brawl to the finish.

Macedo powered through the ruts in the track to keep pace with Schatz and capitalized on the North Dakota driver’s slip up with three laps to go to move back into second. With an 11th championship on the line and the season quickly coming to an end, Schatz is not willing to give up points. He stalked Macedo in the closing laps and snuck his way by him on the final lap to finish in the runner-up spot for the second night in-a-row.

“That’s the way it goes,” Schatz said. “We had to race our way there. At one point we were back in fifth or sixth. To get back up there is good. Consistency wins races. We’ll keep plugging away.”

Macedo admitted he made a mistake by staying up high in the closing laps, allowing Schatz to get back by him. However, he is happy with a podium finish in his first appearance at Grays Harbor Raceway.

Mistakes have haunted Pittman since February when he lost the lead on the final lap at The Dirt Track at Las Vegas. After winning the two season opening races at Volusia Speedway Park, he expected more wins to follow soon after. Many strong runs did, including his first podium finish at the Knoxville Nationals. But no wins.

That changed in August. The weight of not winning was first lifted off his shoulders when he won a non-World of Outlaws $20,000-to-win race at Southern Iowa Speedway. He carried that momentum throughout the month and into September to finally get his 84th career World of Outlaws win.

“Winning the front row challenge (in Iowa) was big for us as a team, just that we could win and it paid good,” Pittman said. “Then to back it up here pretty shortly with an Outlaw win. I feel like we’ve been a top-five, top-three car every night since we left Knoxville. I think momentum is on our side and I don’t think we’re the best team by any means on the road right now, but I think we’re a top three-four contender and if we can do that hopefully wins will follow.”

His next win will mark another crowning achievement. Surpassing his childhood hero’s record.

The World of Outlaws NOS Energy Drink Sprint Car Series on Wednesday, Sept. 4, will be at Willamette Speedway in Lebanon, Ore. Get tickets and more information.