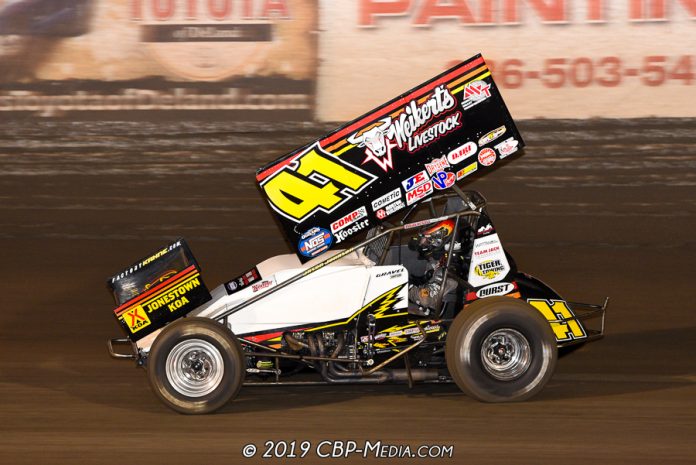 CALISTOGA, CA – David Gravel wants his win total with Jason Johnson Racing to be in the double digits by the end of the season.

He came one step closer to achieving his objective Saturday night at Calistoga Speedway by winning the Wine Country Outlaw Showdown – his eighth World of Outlaws NOS Energy Drink Sprint Car Series victory of the season.

The two drivers started the night in polar opposite scenarios. Sweet qualified 17th out of 22 cars. Gravel set Quick Time for the 15th time this season and set a new track for Calistoga Speedway with a time of 15.672 sec.

Both drivers went on to finished second in their Drydene Heat race. However, Gravel fell from first to second and Sweet charged from sixth to second. Their performance put them both in the DIRTVision Fast Pass Dash, which Gravel drew the pole for and then went on to win.

At the start of the 25-lap Feature, Gravel launched to the lead and Sweet – who started third – took second from Logan Schuchart. Riding the high line of the half-mile track, Gravel gapped Sweet by close to half a track.

On Lap five that changed. Gravel had to wait on the throttle for the slower car of Stephan Ingraham blocking his line, killing his momentum. That allowed Sweet to cut Gravel’s lead in half. After they crossed the line for Lap seven, Sweet threw a slide job at Gravel going into turn one. He rocketed underneath the Mesilla Valley Transportation No. 41 car and put his NAPA Auto Parts No. 49 car in the lead by turn two.

“I got to the 93 car (of Ingraham) at a bad spot and tried to slid him, it was a dumb mistake on my part,” Gravel said. “I deserved to lose the lead there. Racing all of these races, you should know better than that.”

Gravel was able to still exit the corner better than Sweet, though. He hammered the throttle off the turn with the confidence his rear tires would hold on to every inch of the clay surface. They did and he powered back by Sweet going into turn three.

However, Gravel got out of shape on corner entrance, slowing his pace. Sweet was directly behind him and also had to slow to avoid running into Gravel. Before Sweet could attempt a run underneath him on the exit of turn four, a caution came out for Shane Stewart slowing on track.

The next segment of the race after the restart was déjà vu of the first. Gravel launched back to the lead with Sweet behind him, unable to close in. Less than 10 laps later Gravel found himself back on Ingraham’s bumper. Back to having to slow his momentum. And back to having to worry about Sweet breathing down his neck.

Before Sweet could strike again, another caution came out. This time for Chase Johnson having motor issues that resulted in a burst of flames underneath his car, which extinguished by the time he stopped the car.

“It’s one of those things, man, it’s part of dirt track racing, you’ve got to be good in lap traffic and luckily we were,” Gravel said.

Lined up single file for the restart with eight laps to go, Gravel bested Sweet and third-place Schuchart on the start pulling away by several car lengths before the flag stand. With clean air in front of him and no lap traffic to deal with, Gravel put the cap on his dominating night by leading all 25 laps and winning his first career race at Calistoga Speedway.

Sweet had to settle for second but accepted the finish as it allowed him to gain points on Schatz – who finished fourth, after a charge from seventh. Sweet is now 10 points behind Schatz.

“The cautions just kind of came at the wrong time for us,” Sweet said. “He would get out front with clean air and we could stay a half straightaway behind. You needed lap traffic to break his pace… We’ll take it after our qualifying effort. It’s a good rebound for our NAPA Auto Parts car. We’ve got a big picture going on here.”

While Gravel sits third in points, more than 100 points behind Schatz, the big picture for he and his Jason Johnson Racing team is to keep winning. Their eighth win – tying Schatz for the second most wins this season – at Calistoga Speedway was a confidence booster to make that happen.

“It means a lot,” said Philip Dietz, Gravel’s crew chief. “Lately I feel like we’ve been struggling a bit on these tracks out here in California. I feel like they’re a little bit different than a lot of places we go. Calistoga, I feel is more comparative to places we’ve had success at this year, like the Grove and Knoxville. We were kind of able to keep our car pretty similar to what we’ve done there and had success with. Just made for a much easier night.”

With the West Coast swing finished and the World of Outlaws tour heading to the Midwest and East Coast, Gravel and his team have their eye on more dominating performances.

The World of Outlaws NOS Energy Drink Sprint Car Series on Friday, Sept. 20, and Saturday, Sept. 21, will be at Dodge City Raceway Park in Dodge City, Kan. for the Outlaws Boot Hill Showdown. Get tickets and more information.