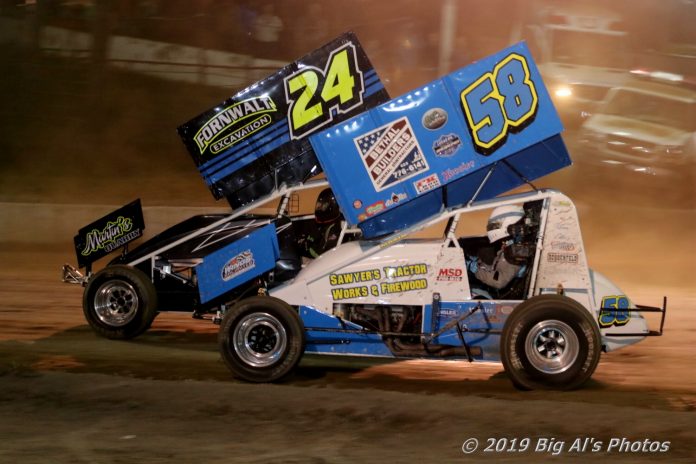 The Green Mountain Gear-Heads Sprint Cars of New England returned to the Bear Ridge Speedway for the final time in 2019 as part of the NE Dirt Track Championship Weekend on Saturday, September 21st. The race format for the evening was very different than the normal procedure as the cars and stars of the Sprint Cars of New England ran two 20 lap Races and inverted the field after the first event with the overall winner being determined by the best combined finish of the events. Time Trials were used to set the starting order of the first 20 lap event.

Clay Dow set fast time in Time Trails and therefore started the first 20-Lap event on the pole with second fast Kurt Conklin on the outside of the front row. When the green flag flew Clay Dow immediately burst out to an impressive lead with Kurt Conklin settling into second with John Scarborough third. By lap four Chris Donnelly had worked by Scarborough into third and then started to track down the second running Conklin. While Clay Dow continued to build his impressive lead Donnelly was challenging Conklin for second and finally executed the pass to claim the spot with thirteen laps complete in the fast paced event. By lap fifteen Dow was encountering lapped traffic which slightly slowed his pace and allowed Donnelly to close the gap between the two some but without any cautions to tighten the field up Clay Dow took the impressive win in the first 20 lap event. Chris Donnelly was second with Kurt Conklin third, John Scarborough fourth and Will Hull completed the top five.

When the second 20 Lap event came to post it was Travis Billington and Mike Kondrat on the front row with Billington getting the jump to bolt into the lead when green flag racing commenced. Kevin Chaffee was on the move, flying to the front from his fourth starting spot to claim the lead with four laps in the books. His lead was very short lived however as just two laps later Will Hull, after starting sixth, blasted by Chaffee and took the top spot. At the halfway mark of the event it was will Hull with the lead, Kevin Chaffee was second with Travis Billington third. Just a lap later however Jake Williams flew by Billington to garner third and two laps later made a slick move get by Kevin Chaffee for second. With five laps to go Claw Dow also worked by Chaffee to take the third spot and that is how they finished the caution free event. Will Hull took the win with Jake Williams second and Clay Dow third. Kevin Chaffee was fourth with Travis Billington claiming fifth.

When the finishes were combined from the two caution free 20 lap Features the overall winner was Clay Dow with Will Hull second, Jacob Williams was third with Chris Donnelly fourth and Kevin Chaffee fifth.

The next event on the Green Mountain Gear-Heads Sprint Cars of New England schedule will be Saturday, October 5th at the RumTown Speedway in Wentworth, NH and will complete the 2019 season.