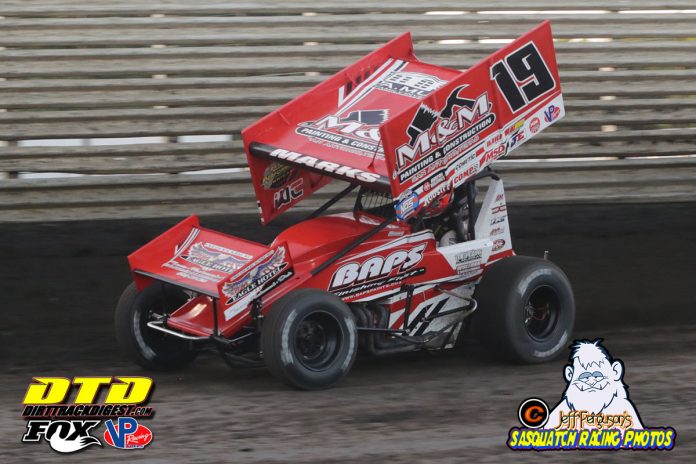 JACKSONVILLE, IL – Brent Marks feels like he left about four potential wins on the table this season.

This week he’s going back to two of the tracks he had a chance to win at earlier in the year and another he wants to conquer.

The World of Outlaws NOS Energy Drink Sprint Car Series on Sept. 25 is returning to Jacksonville Speedway – after the event was rained out in April. It’ll then make its final stop of the year at Eldora Speedway on Sept. 27 and return to Lernerville Speedway the following day on Sept. 28.

The Myerstown, Pa.-native won three races last year, but has been winless, so far, this year.

Before rain ended Jacksonville’s program early in the Spring, Marks looked poised to pick up his first win of the season. He crashed in qualifying but came back strong as the star of the night on the quarter-mile track. He charged from 10th to second in his Drydene Heat race and then went on to win the DIRTVision Fast Pass Dash – placing him on the pole for the Feature that rain put a stop to.

“You know, you never say you’re going to win a race until the end, but I felt like it would be hard for everybody to beat me that night,” Marks said. “I’m excited to get back there and see what we can do and try to have the same kind of night we had there.”

He’ll have to fight for the pole again on Wednesday as the race is an entirely new event.

Marks has been competitive on quarter-mile tracks this year. He led laps at Nashville Fairgrounds Speedway and finished second. He also showed speed at Silver Dollar Speedway for the Gold Cup this month, winning his Heat race and starting third for the Feature – but finished 10th due to getting together with another car, breaking his right rear shock and a link. They’re the two races that stand out the most to him that he feels like he could have won.

If the Kings Royal at Eldora Speedway in July went a few laps longer Marks may have been celebrating another “Big E” victory, too. In the final 20 laps of the race he charged from seventh to third and was rapidly catching the top two in the closing laps.

The half-mile speedway has always been good Marks. He picked up his third career win at the Rossburg, Ohio speedway during the track’s final event of the season last year. He’ll be on the path to repeat on Friday.

“I’m pretty confident to get back to Eldora,” Marks said. “We have a pretty good package there.”

One track he’s still searching for speed at is Lernerville Speedway in Sarver, Pa. – located about four hours from Marks’ home.

“I think I raced there about 15 times and I finished probably five races,” Marks said. “It’s just one of those places, it bites me every time. I’ve got to conquer that place one day and I will. Hopefully it’s [this] week.”

He showed promised at the 4/10-mile track in July by making the Dash but ended up settling for a 14th-place finish in the Feature.

Returning to the Pennsylvania track, with another Pennsylvania race weekend following it, means Marks and his team get to spend time home and at their own shop. Time to relax after two months on the road.

“It’ll be nice to see my family and be at my home and sleep in my own bed,” Marks said. “I’m excited to get back. I don’t get the opportunity to fly home very often, especially when we’re out West. It’ll be good to get back.”

Being away from the shop for that period of time also makes it hard to make various changes to the car when things aren’t working, he added. And this season things have not always gone the way he’d hoped.

“Our season hasn’t been all that great,” Marks said. “A lot of ups and downs. It’s kind of been a struggle this year. We haven’t been able to pass as may race cars as we did last year. Kind of struggled to get started up front. Sometimes that’s how racing goes.”

Last year he ended the season with three wins, seven top-five finishes, 29 top-10 finishes and 71 laps led. So far, this year, he’s collected six top-fives, 20 top-10s and has led 10 laps. There are still 13 races to go this season, though. And several tracks he’s run well at.

While Marks is focused on ending the 2019 season strong, he’s also already making plans for how he can improve his self-owned team next year.

“Honestly, when you’re running your own team, you have to start thinking about next year right after (Knoxville) Nationals,” he said. “I’ve been working on some stuff I want to change, getting a list together of what I need to order. Unfortunately, it’s not like you can order everything after World Finals and have everything in two weeks. All of the companies get slammed and you have to wait a couple of months to get your stuff. Have to try and get a head of the game there and that’s what we’re going to try and do.”

Withholding the fine details, Marks said there are a few changes he made to the car last winter that didn’t work, and he plans on changing back. He also made some changes to his motors this year, which he said he’s been happy with but there’s one motor he wants to revert to how he had it last year.

“You don’t want to try too much, but you’ve got to try stuff to keep moving forward and getting better,” Marks said. “Sometimes it works, sometimes it don’t. Just keep plugging away and try to do the best we can.”

WHEN & WHERE
Wednesday, Sept. 25, at Jacksonville Speedway in Jacksonville, Ill. Get tickets and more information.

Friday, Sept. 27, at Eldora Speedway in Rossburg, Ohio for the BeFour the Crowns Showdown. Get tickets and more information.

Saturday, Sept. 28, at Lernerville Speedway in Sarver, Pa. for the Commonwealth Clash. Get tickets and more information.