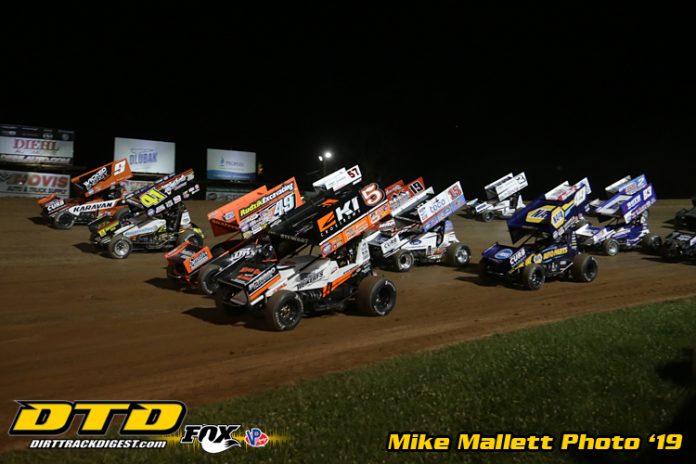 CONCORD, NC – For the first time since 2013 Donny Schatz finds himself in a tight championship points battle with eight races to go before the World Finals season finale at The Dirt Track at Charlotte on Nov. 7-9.

“This championship battle is definitely one of the closest ones we’ve ever had,” said Johnny Gibson, who has been the announcer for the World of Outlaws for more than 20 years.

He recounted the 2009 championship battle, which came down to the final race of the season at The Dirt Track at Charlotte and saw Schatz win by 18 points over Jason Meyers. Joey Saldana in third-place was only 70 points behind Schatz, too.

The last person to halt Schatz from winning another championship was Daryn Pittman in 2013. Pittman ended the season with a 14-point lead over Schatz – en route to his first Series championship. Watching Sweet and Schatz’s battle for the title, Pittman said he’s a little envious.

“It’s probably a pretty fun spot to be in,” Pittman said. “We had a lead and it started to dwindle and probably played it too safe. It’s like they’re starting at Volusia right now but only have [ten] races to settle it. Honestly looks like a lot of fun to be a part of.”

Schatz, of Fargo, N.D., and Sweet, of Grass Valley, Calif., have continuously traded the points lead throughout the year, but neither went as far to define their battle as fun.

He wouldn’t call it stressful either.

“I have nothing to prove,” he said. “Yeah, I want to win a championship more than anything, but at the end of the day we’re out here to compete. We’re out here to race. Brad and I are decent friends. That doesn’t mean we’re going to do anything different on or off the racetrack. At least it doesn’t for me. It’s one of those things that’s going to come right down to the wire. We’ll do our best to be on the right side of it. That’s all we can do.”

Sweet said he would like to be stress free going into the World Finals. Holding the points lead by Charlotte would play a big part in helping with that.

“We’re close right now,” Sweet said. “We just need to run good, keep winning races like we’ve been doing. Like I’ve always said, if you’re winning the points will take care of themselves.”

His win last weekend at Lernerville Speedway – his 16th win of the season and 50th career Series win overall – helped him extend his points lead over Schatz from four points to 40, due to Schatz finishing 18th.

However, two weeks ago Schatz had a 36-point lead over Sweet. Neither driver has been able to run away from the other. The pair are almost inseparable on track each race, too. Usually when you spot one, the other isn’t too far behind. They ran first and second at Lernerville Speedway before Schatz had a motor issue.

For Schatz, whether Sweet is in front of him or behind him, he said he’s not focused on the points. His only concern is winning.

“That’s how we won 10 championships,” Schatz said. “Trying to win the most races. When you can’t win it’s about trying to get the next best finish.”

So far this season Schatz and his Tony Stewart/Curb-Agajanian Racing team have collected nine wins. While his win total this year ranks him as having the second most wins, so far, it’s a departure from his last six seasons where he won more than 20 races each year. Schatz has admitted that continually winning 20 or more races each year is a hard statistic to keep up. Especially with the level of competition this year.

“I definitely think the level of competition has increased – the number of wins among the top-five in points is very close, and there’s a chance we could see four drivers with double digit wins, which has only happened once previously in Outlaw history (in 2000),” Gibson said.

Sweet is also having a career year with his Kasey Kahne Racing team. He’s continued to break his record for most wins in a season – which was previously nine wins, now 16. And he won the $175,000-to-win Kings Royal. His wins and consistency have helped him keep pace with Schatz his year. Both drivers currently have 42 top-five finishes and 58 top-10 finishes in 64 races.

The final eight races before the World Finals are sure to keep the points battle close as there are tracks Schatz and Sweet have had success at and never won at. When they get to The Dirt Track at Charlotte, Schatz may have the upper hand. Sweet has never won at the 4/10-mile track and Schatz has won there 13 times – including a win at the World Finals last year.

However, no matter the points difference come the World Finals, both drivers and their teams are going to put their best effort into winning the 2019 World of Outlaws championship. For Schatz, it would be his 11th title. For Sweet, his first.

“We’ve won the Kings Royal and the Knoxville Nationals, the next thing to do would be to win a World of Outlaws championship,” Sweet said. “You only get these opportunities so often. We’ve never been in this situation before, this close to Donny. You never know what next year brings. We just really want to capitalize on the opportunity we have in front of us. It’s never easy to beat a ten-time champ, so we know we have to be perfect.”

For Schatz, having missed out on winning another Kings Royal and Knoxville Nationals, the championship is the next big target for he and his team.

“I have all the faith in the world in everyone at Tony Stewart Racing,” Schatz said. “I’ve been here twelve plus years and I hope I’m here that long going forward, still being competitive. Right now, we’re at that point where we’ve got to build back up to where we want to be, the king of the hill. We’re not there right now but that’s part of it. We’ve been in that position for a long time. We’ll get there again.”

No matter who wins, fans will be treated to one of the closet points battles in the Series’ history.

“The tight points battle has added yet another level of excitement to what is already the most exciting form of motorsports in the world,” Gibson said. “So, just another reason to love being able to call The Greatest Show on Dirt.”