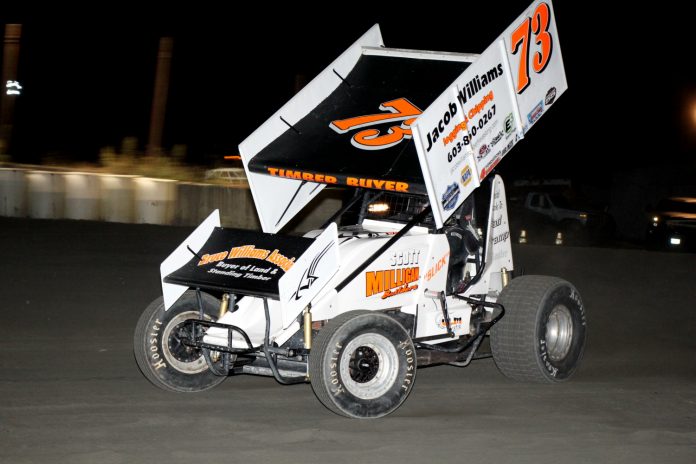 WENTWORTH, NH – The Green Mountain Gear-Heads Sprint Cars of New England season came to a conclusion Saturday, October 5th at the RumTown Speedway where Jake Williams authored a dominating performance to take the Win. In spite of a mechanical issue that prevented Will Hull from competing in the feature event he was crowned the 2019 Champion for the Season.

Kurt Conklin and Jake Williams sat on the front row come feature time with Williams getting the jump to take the lead heading into turn one. Conklin settled into the second spot with Johnny Scarborough third and Floyd Billington fourth. The running order remained the same as the cars flew around the track until Chris Donnelly worked his way by Billington to take fourth with five laps complete. By lap ten leader Williams started to encounter lapped traffic but that didn’t diminish his lead as he continued to set a torrid pace. The only caution of the race occurred on lap nineteen as Robbie Bodwell, making his first start of the season, encountered mechanical issues and was done for the night. On the restart Williams once again blasted to the point with Conklin second and Chris Donnelly getting by Scarborough for third. Also on the restart Tanner Siemons, making his first career start in a Sprint Car, took the fifth spot from Billington, Siemons only held the position for two laps before Billington reclaimed the spot as the 30 lap event rapidly headed towards its’ conclusion. At the Checkers it was Jake Williams with an absolutely dominating win as he was never pressured for the top spot. Kurt Conklin crossed the line in second with Chris Donnelly third. Johnny Scarborough and Floyd Billington rounded out the top five.

That concludes the season for the Green Mountain Gear-Heads Sprint Cars of New England,