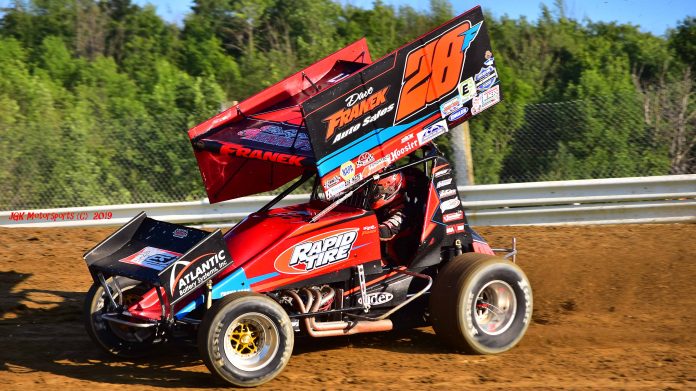 VERNON, NY – It was certainly a coming out party this season for Wantage, New Jersey’s Davie Franek as he elected to race primarily in New York for 2019. Franek had high expectations and certainly exceeded them by picking up his first ever A-Verdi Storage Containers Patriot Sprint Tour Championship.

Franek earned $7600 for his overall championship in addition to $450 for his fifth place point finish in the Canadian Tour for an overall total of $8,050!

In the 23 starts that were on the tour, Franek won four A-Main events. All these wins were at tracks that he has never won at before which makes Franek’s championship all the more special.

Franek mentioned on several different occasions during his championship speech how special it is to race with the drivers here in the northeast and how welcoming they were to him and his entire team.

Franek held off a charging Joe Trenca and Jordan Thomas who finished second and third, respectively. Trenca, of Clay, New York was finally able to pick up his first ever win in 360 competition at Outlaw Speedway on August 2. He then backed up that win with an Outlaw Fall Nationals triumph paying $5,000. Trenca was also named the most improved driver for the tour.

Jordan Thomas did not score a win in PST competition this season but solid consistency provided for several podium finishes at Land of Legends, Outlaw, Woodhull, Ransomville, Cornwall, and Fonda. The young driver from Harding, Pa was also given the Sportsmanship award in honor of Jerry Farrell for his constant positive approach in the pit area (Just like Jerry Farrell).

Five-time series champion, Jared Zimbardi returned to the tour after a part time schedule in 2018 and it was not the season he was hoping for in his return. Two races that resulted in a DNF at Land of Legends and Woodhull certainly played a huge factor to not be a threat for this season’s championship. Zimbardi however was able to grab a win at Brockville Ontario Speedway along with podium finishes at Ransomville, Mercer, and the July Woodhull event.

Pete Richardson also returned to the tour full time in 2019, making all but one start due to an injury. Richardson had a new engine package and brought on Todd Berkheimer as crew chief. Richardson made progressive strides throughout the season which included heat and dash wins as well as a career best fifth place finish at Ransomville. Richardson would also go on to win the Bonnell’s Rod Shop Dash for Cash Series Championship as well as picking up the “Best Appearing Car” award.

Rookie of the year recipient Roger Levesque made it to every single PST event in 2019 from his Bath, Ontario shop. It was noted that Levesque traveled over 8700 miles (14,000 Kilometers) throughout the entire season. This would also earn him Patriot of the year.

Other drivers who were honored at the PST banquet were Steven Glover, Mike Koehler, Jonathan Preston, and Josh Azzi who rounded out the top ten in points. John Trenca was recognized for “just missing the points”, New Comer of the Year and picked up cash from the Bonnell Rod Shop Dash series.

Steve Poirier was acknowledged for winning the 2019 PST Canadian Series, this is the second time in his career Poirier has won this series after winning it back in 2014. Mark Smith, Jared Zimbardi, Jordan Thomas and Davie Franek completed the top five.

Cale Jirinec was the award beneficiary for the dedication to motorsports. Jirinec was essential to the organization in 2019 as he stepped up as the lead tech inspector while also being a top notch safety official.

The banquet ended with closing remarks by PST President, Mike Emhof. He once again thanked his marketing partners and all the teams who support the series week in and week out. Emhof also made note the 2020 schedule is still in the works and a release is expected by about Mid-January. About 25 races are expected to be on the 2020 schedule.

For the sister series, the CRSA tour, Jeff Trombley was once again crowned the series champion for the third time in his career.

Fans as always are encouraged to stay connected with the Patriot Sprint Tour on Facebook and Twitter for several off-season announcements. You can also log onto patriotsprinttour.com

Patriot of the Year-Roger Levesque

Mechanic of the Year- Brian Zyck

Rookie of the Year- Roger Levesque