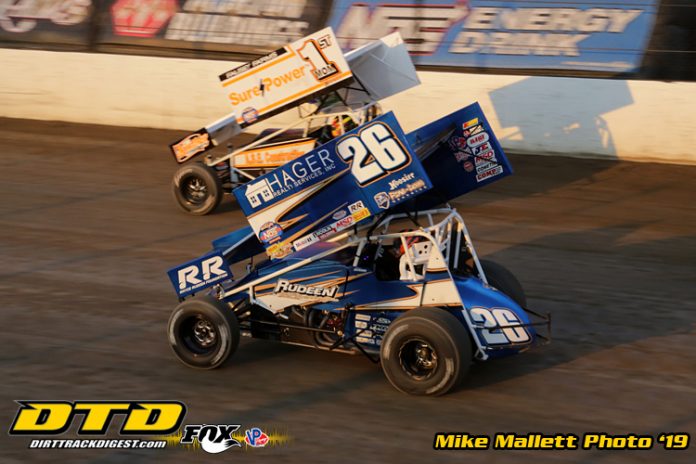 BROWNSBURG, IN – The 2020 Ollie’s Bargain Outlet All Star Circuit of Champions presented by Mobil 1 boasts an impressive schedule of 55 events, 17 of which will award a winner’s payout of at least $6,000. With an exciting slate comes a hefty point fund, as the 2020 All Star Circuit of Champions point fund will now award $258,000 across the top twelve positions including $65,000 for the championship team; a $58,000 increase from 2019. Kevin Rudeen has committed to ‘sponsoring’ $50,000 of the increased fund.

“I’ll be the first to admit that I have never liked points racing, but this past year was a lot of fun for me and my team,” said Kevin Rudeen. “We had an awesome time at the All Star banquet in December and I really like the way that Tony and his team do things with the Series. I’m looking forward to 2020 with our partnership with the All Stars. We will be announcing details at a later date on our 2020 Rayce Rudeen Foundation Race.”

“This is awesome,” said Tony Stewart. “A huge thank you goes out to Kevin Rudeen. He took a chance with the All Stars last year having Cory (Eliason) driving full-time, also put together a nice contingency package for the racers and sponsored a huge Foundation race. Whenever we can give back to our racers, it puts a smile on my face.”

Although not accumulating championship points toward the season-ending point fund, the All Star Circuit of Champions will kick-off their 2020 season with a four-race stint in the Sunshine State, first invading the high-paced Volusia Speedway Park near Barberville, Florida, on Wednesday and Thursday, February 5 & 6, followed by a two-day visit to East Bay Raceway Park just south of Tampa on Monday and Tuesday, February 10 & 11.

The championship point season will activate, officially, on Friday and Saturday, April 10 & 11, with a two-day stay at the highbanks of Attica Raceway Park in Attica, Ohio. The Spring Nationals doubleheader will award $5,000 on each night.