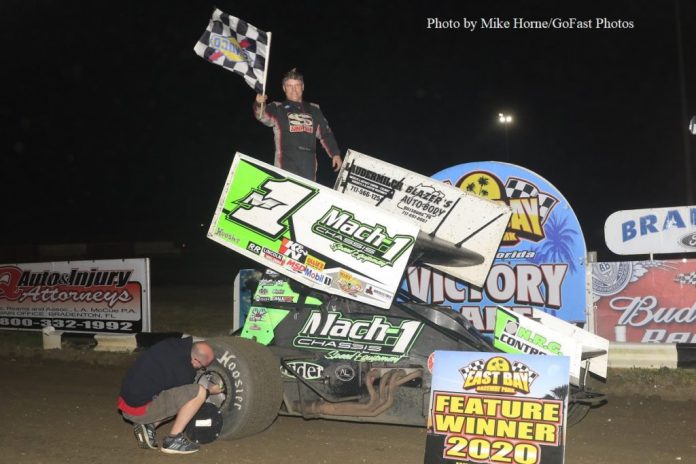 TAMPA, FL – The final segment of the 2020 Winternationals kicked off with three divisions of winged race cars. A field of 53 360 Sprints gathered at the Clay by the Bay for the first of three nights of racing action.

The night started with six heat races with the preliminary events determining the starting lineu0p for the 25-lap A main. A passing points system was implemented, giving the top 16 in passing points an automatic bid into the A main. The remaining cars would go to one of two B-mains, which would each graduate four cars to the feature.

Mark Smith, who started seventh, won the first heat. Terry McCarl powered from the outside front row to claim the second heat. Terry Witherspoon led wire-to-wire from the pole to bring home the third heat. Race #4 saw car #4 of Danny Smith prevail. The fifth race was a win for polesitter Terry Gray while the final heat went to Pennsylvania racer Brock Zearfoss.

Trey Starks of Puyallup, Washington won the first B main while Cory Eliason would get the job done in the second feature. The Wetherington Tractor Service Dash was added to give non-qualified racers an additional opportunity and the win went to local racer Danny Sams III.

The field of 24 was set for the 25-lap A main with Mark Smith and Canadian racer Dylan Westbrook on the front row. The field consisted of racers from 14 states and one Canadian province.

The initial start was called back, due in part to a flat left rear tire for Witherspoon with Danny Dietrich exiting the track during the caution. Witherspoon returned at the tail and the field gathered for the new start. Smith quickly jumped into the lead and immediately began putting distance between himself and second place Westbrook. A lap 8 caution for a three-car tangle in the backstretch brought the field back together and it was a short green flag period as the race was under caution on lap 11 for two cars stopped in turn two. From there, the caution flag stayed holstered but there were some anxious moments. Starks and Danny Smith made contact in a position battle and Smith’s car was momentarily airborne, but the veteran regained control without a need for a yellow.

Terry McCarl was charging on the top side to move to second in the late stages. By then, Smith had literally run away and hid from the rest of the field. Despite dealing with lapped traffic through the remaining 10 laps, Smith was able to cruise to a convincing victory.

The 20-lap Micro Sprint race saw Bill Gise make a last lap pass on Paul Seburn to get to the checkers first. Gise had won the heat race earlier.

The second night of these divisions will take place on Friday, Valentine’s Day. Hot laps are at 6 p.m. with racing underway at 7 p.m.