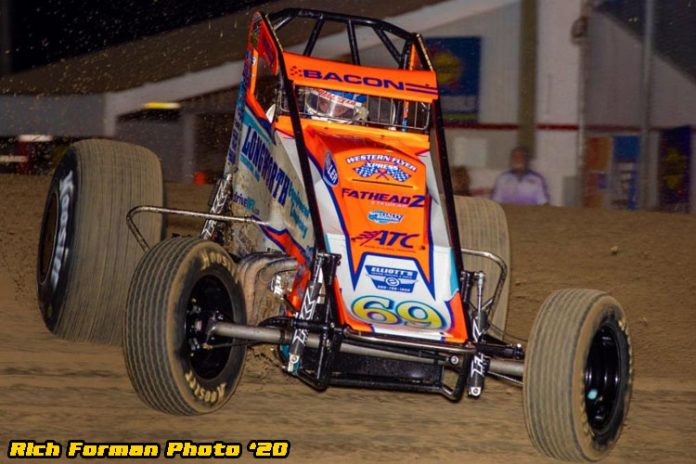 Furthermore, the Broken Arrow, Okla. native’s most recent victory at the 3/8-mile tri-oval came five years prior, leaving him more than eager to quash the early season dry spell that lingered over him entering the 2020 season.

On a weekend that’s been anything but a dry spell with heavy rain washing out Thursday’s intended opener and threatening Friday’s second go with persistent afternoon showers, Bacon rid himself of the early-season cloud of recent years by taking the lead with just four laps remaining to score his third career Winter Dirt Games feature victory.

The win for Bacon in his Dynamics, Inc./Longworth Equipment – Fatheadz Eyewear – DriveWFX.com/Triple X/Rider Chevy notched another milestone for the two-time series champion. With the triumph, Bacon became just the 13th driver to reach the 30-win mark in his USAC National Sprint Car career.

“This win is pretty important to me because we’ve struggled here the past three years,” Bacon admitted. “Getting off to a bad start is not easy. Hopefully, we can keep this momentum going and not start off at a handicap for the rest of the season.”

Bacon had quite a long row to hoe in just 30 laps, starting 9th on the grid on a tricky surface before steadily moving his way through the 22-car field. Meanwhile, at the front of the pack, Kevin Thomas Jr. lunged to the point on the opening lap from his pole position while outside front row starter Kyle Cummins dug in and charged around Thomas to snare the lead off turn four on the opening circuit.

Cummins quickly gapped Thomas by just a tick under a full second during the early stages before encountering lapped traffic on the tenth lap. Cummins met a five-member single-file train of cars at the tail end of the lead lap where he decisively ripped around the outside of traffic as Thomas gave chase, closing up the canyon between the two ever so slightly.

Just one lap later, young Connor Leoffler, making his first career series start and who had just been put a lap down by Cummins, biked hard in turn one before landing on all fours and smacking the right rear against the outer concrete, ending his night.

On the lap 12 resumption, Thomas peeked his nose underneath the ride of Cummins at the exit of turn four, but Cummins slashed away once again and regenerated his advantage at the front, clicking off the fastest lap of the race one lap after the halfway mark.

Just prior to the last 10-lap stanza, Cummins was greeted by a chorus of traffic, allowing Thomas to subtract the interval between he and the lead car of Cummins. On the 20th lap, while exiting turn four, Cummins experienced “a moment” if you will when he and the car of Katlynn Leer collided near the flagstand, sending both into immediate disarray and near disaster. Although, both carried on without issue.

Thomas pounced on the Cummins/Leer mishap and raced to the lead past Cummins a half lap later on the bottom between turns three and four. However, two laps later, Thomas’ bid for victory fell into shambles as his right rear tire went flat on the back straightaway on the 24th lap, granting Cummins the lead as Thomas slowed to a crawl to the work area where his crew swapped out for new rubber, ultimately returning for a 16th place finish.

The ensuing restart with seven laps remaining put Bacon on Cummins’ tail where he immediately let it be known he was going to be a contender. At the conclusion of lap 24 at the exit of turn four, Bacon clawed off turn four under Cummins, racing to a near dead heat at the line with Cummins clinging to a slight advantage as he disallowed Bacon from taking hold of the low line entering turn one.

Bacon continued hounding Cummins on both ends of the racetrack, and on lap 27, Bacon was finally able to squeeze through the crack in the door underneath Cummins entering turn one, to pocket the lead once and for all.

“I knew he had been running the bottom in three and four and it was super, super tricky,” Bacon recalled. “So, I figured if I could pressure him, he’d slide up enough to where I could slip underneath in three and four. I didn’t know if I was going to get him, but I just got enough of a run to slide up and we had a really good car in the middle of one and two. I could turn back down and go the other way without him crossing me over. I felt pretty confident, that if nothing major happened, I could hold on.”

Something major nearly did occur, however, as Bacon’s tire began to deflate in the waning laps, leaking more air as each lap dissipated. But, 30 laps were just enough to race on without a hindrance. To just get to that point, though, it took a box full of patience to make the winning move, but not too much patience as to allow others to find the path to victory first before he did himself.

“I felt like the bottom was going to be good in three and four early, but it took me awhile to figure out how to hit it right without sliding up on entry,” Bacon explained. “Even then, you had to figure out where you were going to put yourself going into the next corner to get a good run. Fortunately, we got by some people just in time before they figured it out too.”

“I felt like I had some pressure,” Cummins said of Bacon’s pursuit of him. “He was pounding the top, so I switched to the bottom. I thought I had him cleared there, but Brady did a good job there. We were really good at the beginning and I really didn’t know where to go there in three and four. I went ahead and went to the top. I saw Brady and I tried to save the bottom. He just had a better car there at the end of the race.”