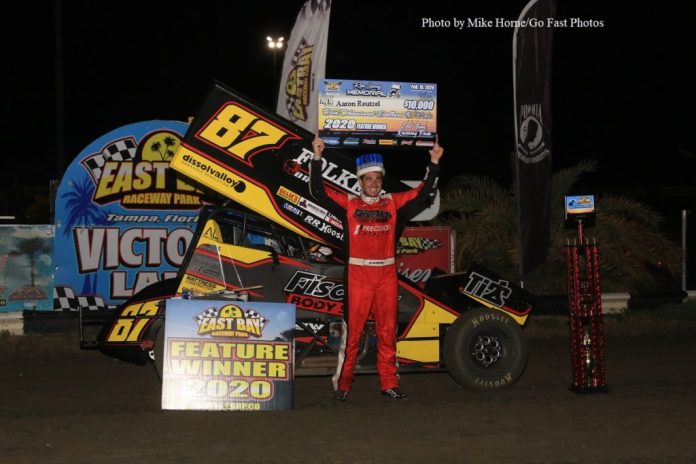 TAMPA, FL – The 2020 Winternationals concluded with a new winner’s name being added to the prestigious list of past champions in the King of the 360s. Texas racer Aaron Reutzel honored the memory of fellow Lone Star racer Ronald Laney, winning the memorial race named in Laney’s honor.

Reutzel was among the six drivers locked in to compete in the 40-lap feature, due to the points accumulated on Thursday night. The standard format calls for points to be accrued through Thursday and Friday action, but, for the first time in 18 years, one of those events was rained out, forcing track officials to honor points from a single night. Thursday winner Mark Smith, along with top finishers Terry McCarl, Dylan Westbrook, Carson McCarl and Brock Zearfoss joined Reutzel in the elite group.

The remaining 47 competitors were lined up in five heat races with the top two finishers advancing to the A-main. A pair of B features brought eight more into the field and the final spot was dedicated to the winner of the Wetherington Tractor Service dash, setting the stages for 25 racers.

Heats were won by Eric Riggins Jr., Brett Wright, Dale Howard, Dustin Gates and Danny Smith. The B mains were captured by Johnny Gilbertson and Tim Shaffer. Matt Kurtz prevailed in the WTS Dash for the final position.

The top six drivers drew for their starting spots and Reutzel, who chose fourth, pulled the #1 box to set himself on the inside of two-time defending champion Terry McCarl for the start of the race.

At the green, it was McCarl who would move to the early advantage. A lap three caution for a stalled Max Stambaugh bunched the field. On the restart, Mark Smith shot past Reutzel for second and held the spot as the next caution flew for a Jason Sides spin. Riggins displaced Reutzel four laps later in the early stages of a long green flag period. Smith closed the gap on McCarl, attempting a pass on lap 13 and finally completing it on lap 14. Meanwhile, Reutzel found something to his linking on the high side of the race track and started the march to the front. He pulled into second by the 20th lap. Four laps later, he shuffled by Smith to take the lead.

On lap 26, a red flag was displayed for a Derek Hagar flip. McCarl slipped into second and the red flag reappeared when Washington racer Trey Starks climbed the backstretch wall on lap 28.

On the restart, Reutzel moved out to a lead but encountered lapped traffic with seven laps to go. Despite finding slower cars in his groove, Reutzel was able to adjust and maintain the effort necessary to pick up his win.

Reutzel had appeared at East Bay earlier in the week to compete with the All-Star Circuit of Champion, winning the opening night feature. He is the two-time defending series champion of that series.

Jim Young made it a clean sweep in the Mini Sprints with his second triumph. The Johnstown, Pennsylvania pilot grabbed the lead at the halfway as early leader Dustin Cates showed signs of brake wear. Young and 2019 East Bay Raceway Park Mini Sprint champion Robby Hoffmann won the heat races.

Bill Gise won the Micro Sprint heat and appeared on his way to his second feature when early race mechanical problems changed the scenario. It set the stage for Paul Seburn’s triumphant return to the winner’s circle after a disappointing Thursday.

The 2020 regular season opener on Saturday, March 7 is the next scheduled action for East Bay Raceway Park, who would like to thank all fans, racer and supporters who helped make the 44th annual Winternationals a success.