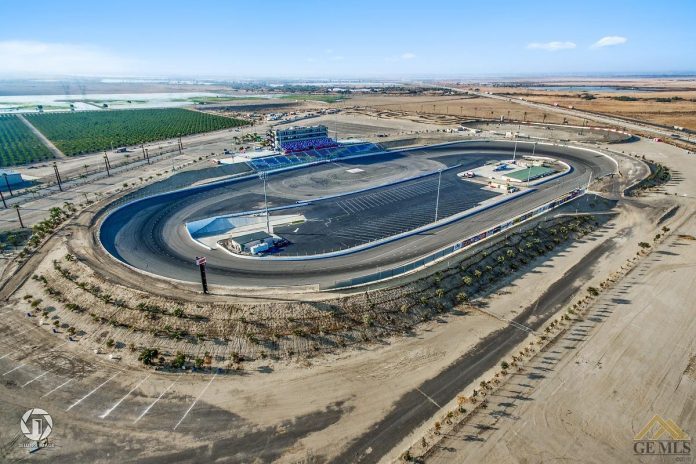 BAKERSFIELD, CA – The NARC King of the West Fujitsu Racing Series will kick off its 2020 sprint car championship quest, this Saturday, March 14th, with a unique season opening “Dual Show” at Kern County Raceway Park.  The night of racing will also feature NASCAR Superstocks and Modifieds on the paved half-mile oval before the 410 sprint cars tackle the exciting one-third mile dirt oval for the Fujitsu Infinite Comfort Shootout.

Race fans have grandstand access to both shows for a single $20 ticket.  There is also a special “Meet the Drivers” autograph session planned on the front straightaway of the asphalt track at 5:00 p.m., which will feature all of the NARC and NASCAR drivers and their racing machines.

NASCAR racing is set to take the green flag at 6:00 p.m.  The 900-plus horsepower sprint cars will begin qualifying on the dirt track at 6:40 p.m., followed by opening ceremonies and racing at 7:30 p.m.

Leading a strong field of open wheel sprint cars to Bakersfield will be defending King of the West champion DJ Netto.  The Hanford, CA driver was a model of consistency last season and outlasted the best drivers in California in a heated points battle.

However, competition is expected to be fierce as several teams have stated their intentions to chase the coveted title.  In fact, championship aspirations may be at an all time high. All teams have spent the off season hard at work building their teams, new racing equipment and and securing financial backing.   Among the who have thrown their names into the championship battle royale is two-time series champion (2002 & 2011) Tim Kaeding of San Jose and 2017 champion Bud Kaeding of Campbell.  Those two have accounted for 89 career series wins so they know their way around victory lane.

Sanders teamed up with Pleasanton, CA car owner Larry Antaya over the winter for their championship quest.  Even though Sanders has claimed five King of the West feature wins, this is his first foray at a title chase with the Northern Auto Racing Club.

“I think we have a very strong team this year,” states Sanders, who has yet to compete on Kern County Raceway’s action-packed one-third mile oval.  “I think we will be okay on some of the tracks I haven’t competed at because Larry has experience at those facilities.  I have always looked forward to running at Kern County.”

What’s it going to take to win the 2020 crown?  Sanders feels it will take an effort very similar to what DJ Netto pulled off last year.  “To win the championship, it will be all about finishing races.  It takes consistent top five finishes and no part failures.”

Tracy’s Kyle Offill and Roseville’s Jodie Robinson have announced their intentions to run for the Johnstone Supply Rookie of the Year honors.

The Dirt Track at Kern County Raceway Park is located in Bakersfield, CA, just off of Highway 5 and Enos Lane.  The address is 13500 Raceway Blvd, Bakersfield, CA  93311.  For more info, go to www.kernraceway.com or NARC410.com.

ED NOTE:  Driver Rico Abreu will be meeting race fans and signing autographs Saturday at noon at Salty’s Barbecue at 6801 White Lane in Bakersfield.  He will be there with his race car between noon and 1:30 p.m.  Stop by for a chance to win free tickets for the event.