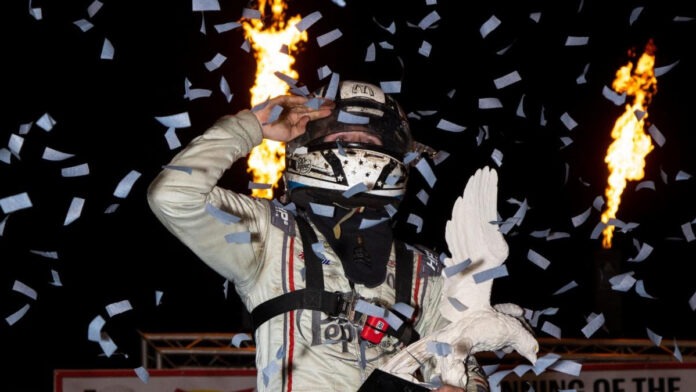 PERRIS, CA – Like any young person raised on the sport of auto racing, having racing heroes of your own is a natural consequence.

Kevin Thomas Jr. is among those individuals.

One of the Cullman, Alabama native’s racing heroes just so happens to be among the select gifted who, themselves, have won the Oval Nationals on three occasions.

Following his performance on Saturday night at southern California’s Perris Auto Speedway, a new name, a new face was added to the books as one of four drivers to capture glory in the traditional November event three different times.

Kevin Thomas Jr. is now among those individuals.

Thomas Jr. tracked down Justin Grant just four laps from the finish, then blazed a trail straight to racing immortality, straight to the land of legends, and straight to the realm of where several of the biggest sprint car racing names have cemented themselves as a hero of the Oval Nationals.

“This is a race I love to win,” a choked-up Thomas stated. “I love taking home those eagles. It’s emotional. It’s our third one. Not many people have done that. I know Dave Darland has and he’s one of my heroes. It’s pretty cool to tie him.”

Thomas’ USAC AMSOIL National Sprint Car leading ninth win of the season in his KT Motorsports/Dr. Pepper Presents the Ronald McDonald House Charities/DRC/Speedway Chevy was especially pertinent based on how his weekend in Perris began – on the wrong side of a historic photo finish in Thursday’s opener with winner Jake Swanson.

Following his runner up result, Swanson finished third on Friday and seemed to be on the cusp of breaking through. However, 40 laps annually present a test of wills, fortune (good and bad), and fortitude of position oneself in the right place at exactly the right time.

Starting fifth in the 25-car field, Thomas remained in constant pursuit of the leaders throughout the first three-quarters of the race. Meanwhile, at the head of the field, Grant had established a foothold in the lead from the outset as he powered around pole sitter and Super Six Dash winner C.J. Leary on lap one while all others continuously strategized how to reel him back in to their grasp.

A melee put a stoppage to the event just two laps in when 13th running Logan Williams spun sideways in turn four. He was then T-boned by the oncoming 20th place car of Matt Mitchell. Both came to a rest near the outside wall with damage. At the same time, 18th running Eddie Tafoya Jr. was collected in the incident and walloped the inside front straightaway wall. All drivers were uninjured but the same could not be said for their cars as all had their races come to a premature conclusion.

During the yellow, 7th running and fast qualifier Damion Gardner bowed out with brake issues that ended his bid for a record fourth Oval Nationals score, relegating hm to a 22nd place result.

Coming up on the halfway mark, Grant found a close encounter of the traffic kind in turn four when he and 19th place Dennis Gile met wheel-to-wheel, but Grant continued on safely, no harm-no foul, while the encroaching machines of Leary in 2nd, Tanner Thorson in 3rd and Thomas in 4th became stifled in the quagmire of lapped cars, which allowed Grant to build up his lead to 2.5 seconds.

However, the gridlock did help Thomas a bit further back as he picked and grinned his way around the outside of Thorson for 3rd at the stripe on lap 19, then struck once more in much cleaner air on lap 23 as he bolted past Leary around the outside on the front straightaway to move to 2nd.

In short order, Thomas downsized Grant’s lead a full two seconds in the ensuing laps, turning the quickest lap amongst anybody in the entire race on the 25th circuit, ultimately charging around the outside of Grant to nip him by a wheel at the line on lap 31. Grant surged back ahead of Thomas on the bottom of turn one mere moments later, but now inherited a Noah’s Ark of traffic within his view, two by two, marching high and low.

Grant and Thomas played the game with Grant drifting high and Thomas sticking low as they split Gile midway down the back straightaway with eight laps remaining. Grant staved off Thomas’ charge for the time being with the topside cleared away and the bottom clamped down by the lappers.

That reason soon became clear when Thomas’ shining moment rose with four laps remaining as he stuck the bottom in turns three and four while Grant negotiated the long road home up top on the cushion. A major run by Thomas shot him past Grant to a car length advantage at the line on the 37th lap and, from there on, Thomas took the stage front and center, all for his own as he began his countdown to victory.

A quick dismissal of the now-lapped car of Charles Davis Jr. by Thomas in turn one with two go put a mountainous, insurmountable half-straightaway separation between Thomas and Grant that completed the final chapter of the silver edition of the event which began 25 years earlier in 1996.

Thomas ran away to a final winning margin of 3.129 seconds at the finish line with Grant second, Leary third, Thorson fourth and point leader Brady Bacon rounding out the top-five.

“We got the win and I’m just so proud of these guys and everybody that’s behind us,” Thomas said in praise after corralling the $10,000 winning prize. “A lot of those people believed in me when a lot of people didn’t. I’m fortunate to have all those people behind me and doing good things for us. They gave me one heck of a racecar and they read that track perfectly. They did their job 100 percent. That was a good one to drive.”

“The bottom started getting narrow and the top stayed so dirty,” Grant explained. “I had to slow down so much to try and get stuck on the bottom. I don’t do a whole lot other than go pound the fence, so we usually leave that thing set on ‘cushion kill.’ When the bottom gets that narrow, it’s hard on us. We figured if we were going to win this race, it was going to be on the boards, but when the bottom got that thin, I had to get so slow. KTJ was just better than we were at the end, and we really started fading with about 10 to go and got real bad with about five to go.”

“This car was really consistent all weekend, which is something we haven’t had a lot of the year,” Leary admitted. “We’ve struggled and we’ve been really good, then we’ve been not so good. This weekend was not bad at all.”