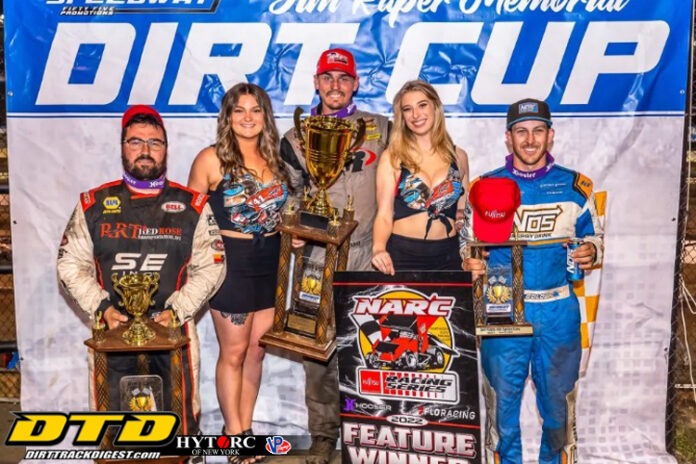 BURLINGTON, WA – California might’ve claimed round one of the 50th Annual Jim Raper Memorial Dirt Cup, but Washington would not be denied as the bell rang for round two.

Fireworks boomed above the backstretch, and the Northwest crowd roared as Puyallup, Washington’s Trey Starks climbed atop his car in Skagit Speedway victory lane having emerged as Friday’s winner of the second and final Dirt Cup preliminary with the NARC Fujitsu General Sprint Cars.

It was a special night for the 26-year-old. While he’s won dozens of races in his home region, Starks had never taken a Dirt Cup checkered flag in the finale or a prelim. It also marked his seventh win in 10 total races in 2022 and his second in three races with NARC this year.

As a bonus, Starks got to battle his good friend, Dominic Scelzi, for the victory.

“It was a really good race,” Starks said. “I’m so happy to be back up on stage in front of the hometown crowd.”

Starks began the race outside the front row with Garen Linder on the pole. Starks ripped the outside in his T&C Concepts No. 55 to lead the opening circuit as Scelzi quickly jumped from sixth to third in the opening laps.

A red flag flew with 36 to go as Tanner Holmes made contact with another car out of turn four, sending Holmes on a wild flip, his second nasty crash in as many days. Holmes walked away under his own power.

On the restart Scelzi wasted no time clearing Linder with a slider to move into the runner-up spot and setting his sights on Starks. As the lead duo began to work through traffic 10 laps in Scelzi closed in. Scelzi threw his first slider attempt at Starks but couldn’t clear him.

Then, Scelzi regrouped and sent another slide job, making the pass this time and leading lap 15. Starks, though, rallied and returned the favor with his own successful slider to take the lead back.

Starks began to build a small advantage over Scelzi, but with 19 to go the red flag flew again as Zeb Wise got above the cushion in turn three and climbed the fence before getting upside down. Wise was okay.

On the ensuing restart Scelzi slid Starks in turn three, but Starks again answered, perfectly rolling the bottom in turns one and two to edge ahead of Scelzi.

“I saw Dominic more than a few times,” Starks said of their battle. “And we were able to combat every one of his moves.”

Starks took off after snagging the lead back from Scelzi. He found himself in heavy traffic as the race dipped inside 10 laps to go. Scelzi took a peak to his inside on multiple occasions in traffic but couldn’t quite challenge him.

A couple of late yellows bunched things up, but Starks pulled away each time and ultimately held on to win by just under eight tenths of a second. With how his points situation had been at the time the Fujitsu Feature started, Starks knew he needed to win to stay alive in Dirt Cup standings head into Saturday’s $50,000 to win finale..

“I knew starting on the front row we were basically going to have to win to put us in any decent position for points tomorrow,” Starks expiated “It was a hard fought race.”

Scelzi held on for second in his Red Rose Transportation/Whipple Superchargers No. 41, his 10th NARC podium of the year. Scelzi thought a longer green flag run might’ve allowed him a chance at the lead.

“I would’ve liked to have seen traffic stay,” Scelzi said. “I think in open air he (Starks) was probably better for the first four or five laps, and then I seemed to start coming back to him. The car was perfect tonight.”

Completing the podium was Shane Golobic in his NOS Energy Drink/Elk Grove Ford No. 17W. While he would’ve liked to win, Golobic stayed focused on the big picture.

“Third is not exactly what we came for,” Golobic said. “But in this format points are everything and we had a decent points night, going seventh to third. We’ll take it.”

Tyler Courtney is the high point man heading into Saturday’s finale and will be guaranteed a front row starting spot in the 50-lap main event.

*The Feature was shortened by three laps due to tire wear concerns.