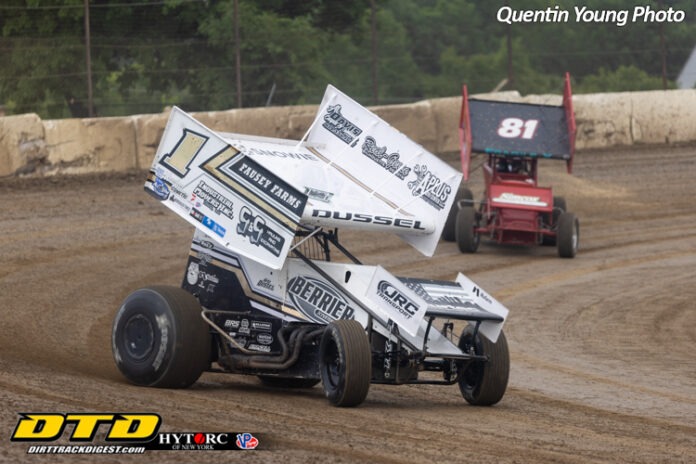 FRANKLIN, PA-Tri-City Raceway Park will present a special event for the 410 Sprint Cars this Sunday, August 29. The stars and cars of the FAST Sprint Series will challenge the strong contingent of Shawgo Real Estate LLC Sprints for a top prize of $3,000. The race will also pay a healthy $350 to start the main event!
Aaron Fry is the President of the FAST Series. Fry is a former Sprint Car racer who formed the Buckeye Outlaw Sprint Series (BOSS), which is a successful non-wing tour that is based in Ohio and visits the surrounding areas, including Western Pennsylvania. A couple of seasons ago, Fry acquired the FAST Series, then known as the Fremont Attica Sprint Tour. Rich Farmer founded that tour when he operated Fremont Speedway, in northwestern Ohio. Before passing the baton to Fry, Farmer began to schedule races at other venues, mostly in Ohio and Michigan. Fry has continued to expand the footprint of his winged series, taking the FAST racers into West Virginia, Indiana, and, now, Pennsylvania.
The FAST Series has held eleven races so far in 2022. Nate Dussel, a top competitor at Attica Raceway Park and Fremont Speedway, holds down the point lead on the strength of four victories. Other winners on the FAST circuit include rising phenom Buddy Kofoid, Danny Sams, Henry Malcuit, Lee Jacobs, and Travis Philo. Ricky Peterson, who already has one victory at Tri-City in 2022, has won with the FAST Series. Western Pennsylvania racer Sye Lynch has also won on the FAST circuit in 2022.
In addition to Dussel, Jacobs, and Peterson, other drivers ranking high in the point standings for the FAST Series include Sean Rayhall, from Massachusetts, and Ohio drivers Mitch Harble, Zeth Sabo, Trey Jacobs, and Nathan Skaggs. These drivers, and many others, are expected.
Jack Sodeman, Jr. has a foot in both camps. He sits ninth the FAST points and he currently leads the chase for the Shawgo Real Estate LLC points title at Tri-City Raceway Park.
Joining Sodeman will be track regulars like A.J. Flick, Bob Felmlee, Brandon and Brent Matus, Carl Bowser, Chase Metheney, Jeremy Weaver, and Dylan McCandless. Those drivers, and others, will want to defend the home turf from the FAST invaders.
This race will make history for both the FAST Series and Tri-City Raceway Park. You will want to be there to see it for yourself!
There will be plenty of other racing action this Sunday.
A second helping of winged Sprint Cars will be provided by the Allegheny Sprint Tour. These racers use smaller, 305 cubic inch engines to power their cars, but they are still plenty fast on the big half mile oval.
The Hovis Auto & Truck Supply Pro Stocks will compete in double features. At 5:30, the Pro Stocks will take to the track for a make-up race held over from a rain-out earlier in the month of August. Then, the Pro Stocks will compete in heats and another feature later in the evening.
The 4 Your Car Connection Mini Stocks will complete the card this Sunday.
In consideration of the travel arrangements for many of the FAST regulars, the 410 Sprints will be first up for their heat races, B Main, and A Main. The 410 Sprint Car feature will be held before the intermission.
All of this action can be seen for the low ticket price of $20 for adults. Seniors (ages 62 and up) can take in the event for $18, and students (ages 10 through 16) will be admitted for $15. Children (age 10 and under) are free, as usual at Tri-City Raceway Park. Pit Passes will be $35.
The Pit Gates will swing open at 2 p.m. The racers are advised to arrive early because a banner field of cars is anticipated. Plus, with the 5:30 starting time for the Pro Stocks, those racers will have less time to get ready for the night’s action.
Spectators can be admitted to the grandstand commencing at 4 p.m. Come out early to get your favorite seats!
Further information about Tri-City Raceway Park can be obtained by calling the track office at 724-967-4601, or by e-mailing the office at tricityracewaypark2020@gmail.com. Or, you can check the web at Tri-CityRacewayPark.com, or the Facebook page at Tri City Raceway Park. Tri-City Raceway Park is located just a few miles north of Franklin, PA, at 3430 State Route 417 in Oakland Township.