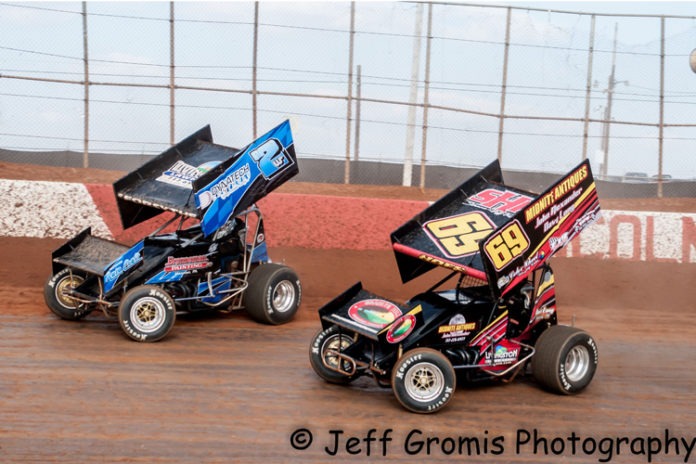 Abbottstown, PA – “And, once again, all is right in the world.”

So says Wayne Harper, voice of Lincoln Speedway, each year following the first hot lap session of Lincoln Speedway’s “Icebreaker 30,” the 410 sprint car opener in the Northeast region of the United States. And after a long off-season filled with changes on and off the track, the 2017 season will take the green flag on Saturday, February 25th at 2:00 p.m. Gates will open at noon.

New bleachers in the general admission grandstands will greet spectators entering the speedway as the cement seating on the front stretch has been upgraded to traditional bleacher seats. Reserved season ticket holders will now have individual seats at the top of the grandstands as well.

As for the drivers, much will remain the same. Five-time track champion Brian Montieth and the Jerry Parrish owned, Premier AutoWorks #21 will return as well as the two-time and defending track champion Alan Krimes in his family-owned and operated #87. 2012 track champion and two-time World of Outlaw winner at Lincoln Danny Dietrich plans on running a heavily Lincoln based schedule in 2017 aboard his Weikert’s Livestock Gary Kauffman-owned #48. Four-time feature winner at Lincoln in 2017 Greg Hodnett, who won last year’s “Icebreaker 30,” will be a force to be reckoned with in his Michael Heffner-owned #27 entry.

There will also be some changes in the pits to open the 2017 season. Cory Haas, fourth in the 2016 Lawrence Chevrolet point standings, will be aboard the John Trone #39 in 2017, while Lucas Wolfe will jump into the Michael Barshinger entry, previously occupied by Haas the past decade. 2015 National Sprint Car Rookie of the Year Chase Dietz will pursue his first Lincoln track championship in his first full season with the Godfrey motorsports team. 2016 National Sprint Car Rookie of the Year Matt Campbell will be running 410’s full-time in 2017 and will be looking to improve on his eye-opening top ten finish at September’s “Dirt Classic.”


Expect 2016 Lincoln Speedway Rookie of the Year Joe Kata III to make the eight-hour round-trip down from New York as he did so many times last year. Frequent Lincoln afternoon show visitor Ohio’s Cole Duncan and Western Pennsylvania’s 2015 Lernerville track champion AJ Flick have both expressed interested in attending the season opener weather-permitting.

Staples in the Lincoln Speedway pits such as Jim Siegel, Brandon and Freddie Rahmer, Kyle Moody, Tyler Ross and Billy Dietrich are expected to be in attendance as well. All of the above recorded wins in the 2016 campaign.