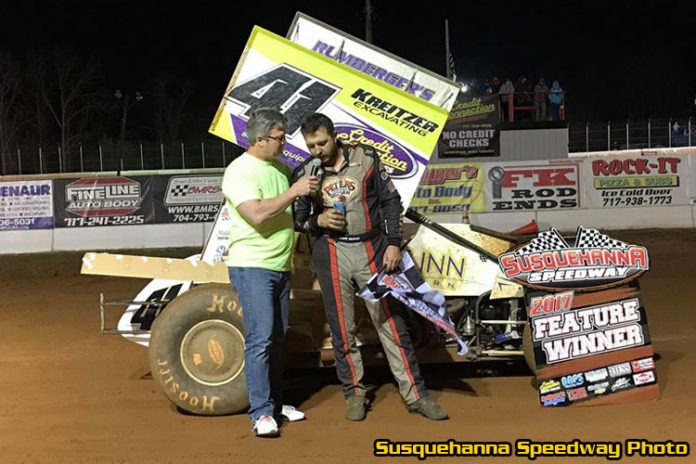 After finishing in a tie with Russ Mitten for the 2016 track championship (Mitten was champ based on wins), Geesey drove through the field from his 15th starting spot to secure the opening night win in the 25-lap Credit Connection Auto Sales Super Sportsman feature.

Aboard his Kreitzer Excavating, Crredit Connection Auto Sales, Silver Lake Inn, Rumbergers Automotive Service Center No. 41, the Wellsville driver worked his way past leader Paul Miller on the 19th lap and drove off for the feature win.

Miller led first three laps of the feature before giving way to defending track champ Mitten, who led until lap 11 when Miller regained the top spot.

Eichelberger, Frankie Herr and Devin Beidel were heat race winners for the 29 Super Sportsman. Dellinger was the B-Main winner.

Herr was a flip victim late in the feature while Beidel saw his race car go up in flames early in the feature. Neither driver was injured.

By virtue of drawing the pole for the feature, the Manchester driver was never seriously challenged in scoring the opening night win in his No. 74 machine.

Shank, Ehrhart and Chase Billet for were heat winners for the 24-car field.

Harlon Leppo, Chaney and Stough were Legend heat winners. There were 24 cars pitside.

The 20-lap Morgan Paving./Aqua Fun Pools Street Stock feature had all kinds of action at the front as defending champion Mike Potts led the first 11 laps before pitting with a flat tire.

This turned the lead to Kevin Sigler but Sigler and two more frontrunners were involved in crashes before a lap could be complete.

Eddie Richards, who started eighth assumed command of the feature and would score the win ahead of Potts, who drove back through the field.

Smith and Joey Hoffer won heats for the 24 Street Stocks.

There will also be a Test ‘N’ Tune on Wednesday night, April 5 from 6-9PM at the Speedway.
SUSQUEHANNA SPEEDWAY
RACE RESULTS 3/25/17