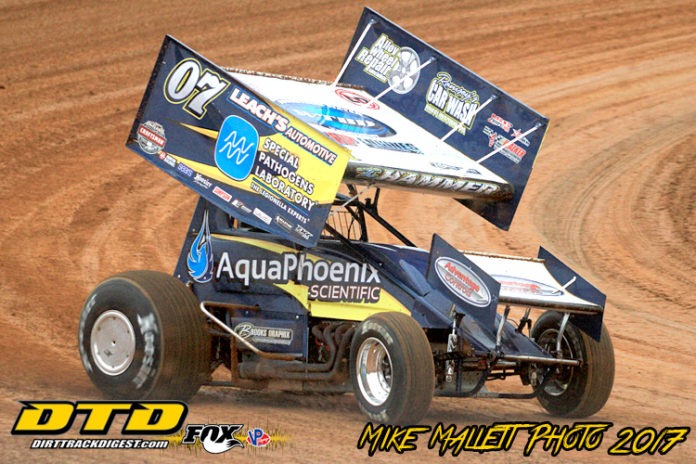 PORT ROYAL, Pa. – Doug Esh outran Greg Hodnett to win the 25-lap sprint car feature at Port Royal Speedway on Saturday night, holding Hodnett off as the pair raced in and out of traffic at lightning fast speeds.

In the 22-lap super late model main it was Danville’s Jeff Rine taking the 14th victory of his career at the track, overtaking Devin Friese for the win.

And the 18-lap 305 sprint main went to Tyler Reeser in what was a crash-filled event.

Esh’s run to victory was anything but easy from his pole starting spot as no less than three restarts took place with Hodnett glued to his tail on the extremely fast speedway surface.

The leader hit the backmarkers on the fourth lap of the main just before the first caution flag unfurled and after the restart Esh again hit traffic on the 10th tour.

And the two leaders were darting through traffic when Esh narrowly avoided disaster in the fourth corner when he came up on a suddenly slowing Eric Tomecek, all but looping the car in evasive action.

Another restart with 11 laps to go after Ryan Smith stopped on the track set up the final run to the checkers with Hodnett leaving absolutely no breathing room for Esh.

The pair again entered lapped traffic with five laps to go with Esh holding just a few tenths of a second advantage over Hodnett.

At no time during the race was Esh’s advantage more than .7 seconds over Hodnett and even  those few tenths evaporated as the pair shot off of the fourth corner for the checkers when Esh swung wide in traffic allowing Hodnett to close to within .101 seconds as the pair crossed the finish line.

The win was the eighth of Esh’s career at the track.

Devin Friese took the lead at the start of the super late model main over Tim Wilson while eventual winner Rine started fifth in the field.

The pace was slowed for the first time with three laps away finding Rick Singleton now up to second with Wilson and Rine following.

Singleton briefly challenged for the lead on the restart but when he brushed across Friese’s rear bumper, destroying his momentum, Rine motored by on the inside for second on the sixth tour.

Friese held Rine at bay for several laps from that point on as Rine consistently took jabs for the top spot to Friese’s inside.

But then in his first and only attempt at an outside pass for the lead, Rine easily zoomed into control in the third turn to check out on the rest of the field.

He took the win by 3.329 seconds over Friese followed by Singleton, Darryl Hills and Coleby Frye.

Heats went to Singleton, Wilson and Friese with Singleton setting a new one-lap track record in his qualifier with a lap of 17.728 seconds.

The crash-laden 305 sprint main saw Tyler Reeser wire the field after starting the race in fourth.

Cale Reigle took second spot on the third lap but failed to snare the lead despite several attempts at gaining the top spot.

Red flag stoppages marred the event on the second, fifth and 10th lap.

Sixth through 10th went to Zach Newlin, Reed Thompson, Kassidy Kreitz, Andrew Hake and Fred Arnold with only those 10 cars finishing the event.

Reeser set a new one-lap track record in the feature with a lap of 17.583 seconds, overtaking a new mark set by Miller in the first heat race.