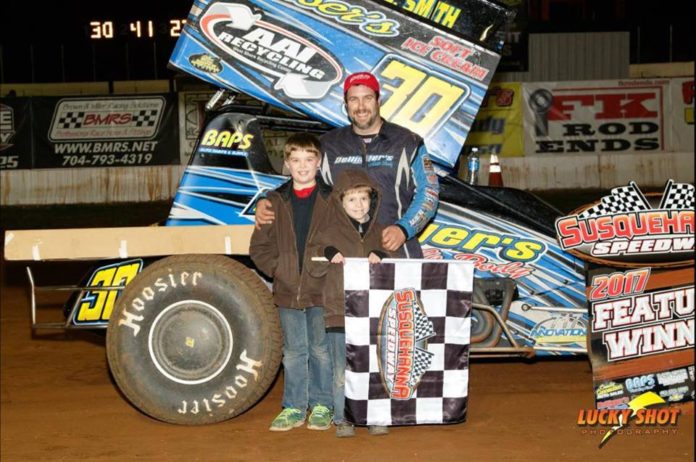 YORK HAVEN, PA – Last season, Scott Dellinger only visited victory lane one time at Susquehanna Speedway. That win came late in the season in the Sportsman 100.

Aboard his Dellinger Auto Body, AAI Recycling, Reeser’s Soft Serve Ice Cream, G.A. Smith Towing No. 30 machine, Dellinger started 10th on the grid and worked this way to the front, coming on strong in the waning laps of the 25-lap feature. Dellinger tracked down leader Geesey and after several attempts to take the lead, Dellinger made the race winning move with 23 laps complete and drove away for the win.

Jay Fannasy led the first seven laps before giving way to Geesey, who held the point until lap 22 when Dellinger took over.

Geesey, Davey Walsh and Fannasy won heats for the 28-car field while Edkin was the consolation winner.

Starting on the pole, Garlock was never seriously challenged in his No. 19 late model and defeated Brad Shank, who finished in the runner-up spot for the second consecutive week. Andrew Yoder raced home third ahead of Robbie Black and Eric Irvin.

Shank, Shuey, Garlock and Black were heat winners for the strong field of of 34 cars for the Mason Dixon Shootout. Todd Snook won the consolation.

Greg Diehl became the third and final leader in the 20-lap Morgan Paving Aqua Fun Pools Street Stock feature to pick up his first win of the season.

Defending champ Mike Potts led the first 10 laps before suffering a flat tire and having to pit. That turned the lead over to Dalton Frye who held the point until lap 16 when Diehl, who started 10th took command of the event and raced to the win ahead of Frye (best career finish), Artwerks Hard Charger Eric Tripp up from 15th, Jim Jacobs and Matt Adams.

In defense of his 2016 track championship, Alex Updegraff led all 20 laps of the Superior Homes Extreme Stock feature to take the first checkered flag of the season.

McClane was the lone heat race winner for the 12 car field.

Then on Sunday, April 9, it will be the first of seven BAPS Auto Paints and Supplies 410 Sprint Series events. Joining the 410 sprints on the Sunday night card will be the 358 Sprints. It will also be Wintermyers Auto Salvage Night. Racing begins at 6PM.

There will also be a Test ‘N’ Tune on Wednesday night, April 5 from 6-9PM at the Speedway.