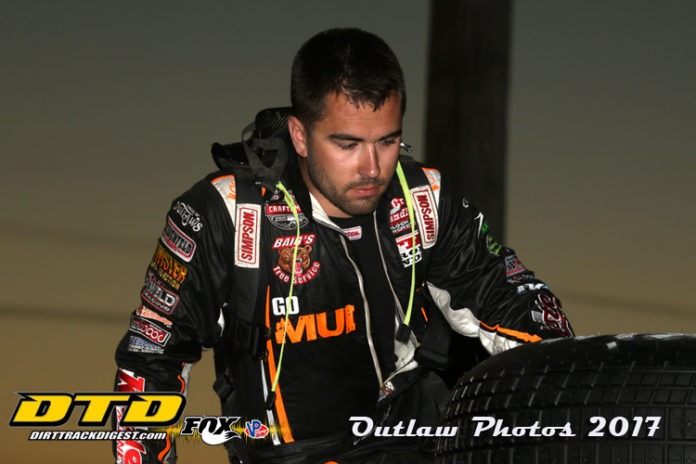 CONCORD, NC – The World of Outlaws Craftsman® Sprint Car Series rolls into the Hoosier state for the Bob Newton Classic at Plymouth Speedway on Friday, April 28 before heading south to Tri-State Speedway the following night.

The Outlaws will first tackle Plymouth Speedway on Friday, April 28th. The Series made its debut at the semi-banked, 3/8th-mile oval in Plymouth, IN last season. Joey Saldana sat on the pole for last year’s the inaugural event, but it was the ‘Big Cat’ Brad Sweet that went on to claim the victory. Saldana came home with a top-five finish.

Off to a fast start in the 2017 season is the No. 5 CJB Motorsports GoMuddy.com team. With three wins, the team sits second in the points standings after the first two months of the season. Driver David Gravel and crew chief Barry Jackson and team are hitting on all cylinders heading into the spring months of the season.

The World of Outlaws Craftsman Sprint Car Series makes its annual stop at Tri-State Speedway’s high-banked, quarter-mile on Saturday, April 29. Gravel and his No. 5 GoMuddy.com team are the defending champions of the event. Better still, Barry Jackson has been the winning crew chief for the last three races at Tri-State. Gravel visited Victory Lane earlier this season at Thunderbowl Raceway in Tulare, CA, a speedway that holds many of the same characteristics as the Haubstadt, IN track.


“It’s our second year together as a team,” said Gravel. “We had a great season last year and kept all the same equipment. We have a notebook built up. It helps to unload with a baseline set up, and we can work off of that. You kind of get in a rhythm and get in those [Craftsman Club] Dashes and try to win races.”

Look for Gravel, Jackson and the No. 5 CJB Motorsports team to add to their win total at Tri-State Speedway and to close the gap on current points leader Donny Schatz.

Tickets for the event at Plymouth Speedway can be found at worldofoutlaws.com/tickets or by calling 844-DIRT-TIX (844-347-8849).