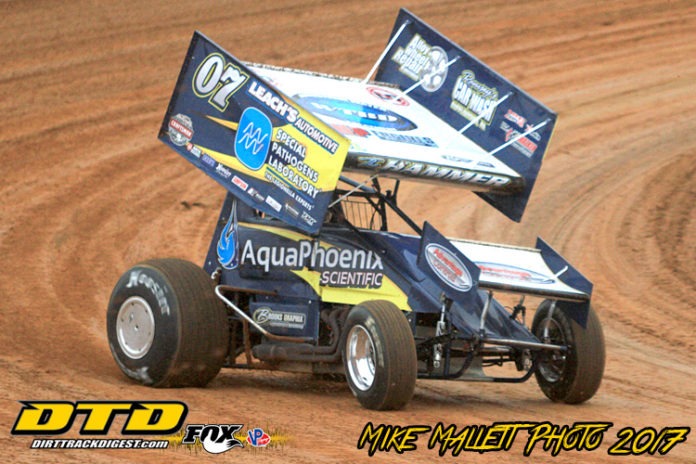 PORT ROYAL, Pa. – Doug Esh went two for two on Saturday night at Port Royal Speedway, claiming his second sprint car win in as many weeks at the track, besting Greg Hodnett both times for the victory.

Elsewhere, Mike Lupfer was in the right place at the right time to go on and record his first win of the season in the super late model main after having raced his way into second behind leader Dylan Yoder.

And in the econo late model main it was Todd Snook taking the win while Herm Renninger made a return to racing after several years off the track to take the xtreme stock main.

Fourth starter Esh of Lancaster blasted right through the middle of the front row when the green flag appeared in the 410 sprint car main to blister by Ryan Taylor and Dale Blaney for immediate control.

Esh then just rocketed away with the lead, entering the backmarkers on the fifth tour.


Blaney settled into second with Hodnett third during the early going but the pace was slowed with 10 laps away for a stopped Logan Wagner, who had been running in fifth.

Hodnett finally muscled his way around Blaney with 13 laps to go and set his sights on leader Esh but Esh again was way out in front and again working the rear of the field.

However Esh’s fortunes changed a bit with seven laps to go when he slammed the frontstretch wall, allowing Hodnett to gain some ground.

With his mount still underneath him, Esh did his best to stay ahead of Hodnett during the late stages albeit a faltering advantage as the laps ticked down.

In the end, Hodnett was 1.469 seconds behind as the pair crossed the finish line. The win was the ninth of Esh’s career at the Port Royal oval.

Heats for the 30 sprint cars went to Hodnett, Blaney and Taylor with Kody Lehman taking the consolation race.  Fast time in time trials went to Stutts with a lap of 16.561 seconds.

Matt Parks took the lead from the pole in the 22-lap super late model main followed by Dylan Yoder on the first lap.

Yoder immediately challenged for the lead and raced back and forth with Parks for control before finally securing the spot on the sixth tour and driving away from the rest of the pack.

The red flag appeared on the 12th circuit when flames erupted under Yoder’s hood, handing the lead over to Mike Lupfer.

Lupfer had started sixth in the field and raced his way to the front, taking second from Parks with 12 laps to go.

Parks tried to challenge for the win on the restart but with time, Lupfer was able to pull away for the checkers by .248 seconds over Parks.

Heats for the 20 late models went to Frye and Brenneman.

Todd Snook wired the field for the win in the 18-lap econo late model feature.

Defending division champion Devin Hart challenged early and late for the win but Snook proved up to the challenge.

After surrendering second to Andrew Yoder, who also challenged Snook for the win, Hart reclaimed the spot during the last several laps only to lose it on the final lap as he made a bid for the lead.

Herm Renninger took the lead from Daren Rice on the second lap of the 15-lap xtreme stock feature to record the victory over Bill Powell.

The 2004 enduro dash champion at the track, Renninger was away from racing for years before making a comeback in 2017 to win in his debut.