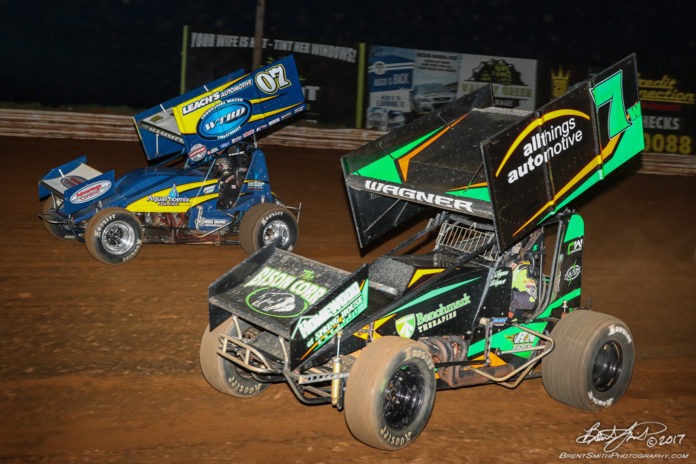 YORK HAVEN, PA – It’s no secret that Logan Wagner hasn’t had much success at Susquehanna Speedway in a 410 Sprint car.

So what does a driver do about that? Go back and put on a show.


“First race here last year, I wadded it up on the opening going into one and the last time we were here, we dumped it in three and ended up wadding it up again and everybody said why are you going back to Susky, every time you go there you wreck and I said I’m going there to win and we did, it was badass man,” stated Wagner after his popular upset win and first ever 410 sprint car win at the York Haven oval.

Not only did Wagner win, but he made a move on a lap 16 restart that saw him drive by both leader Doug Esh and runner-up Greg Hodnett as the trio raced into the first turn. That move was the race winning move and Wagner would never look back enroute to the $3,200 payday.

Kyle Reinhardt grabbed the lead early in the event and held the point until a lap five restart, when Esh got into him in turn two sending Reinhardt’s No. 91 into a series of flips.

Esh would leave until the lap 16 restart when Wagner took the lead as eighth starting Greg Hodnett moved by Esh on lap 17 and was racing a car length behind Wagner when his right rear tire exploded with 23 laps in.

Wagner again held the point on the restart, keeping Esh and Lance Dewease at bay and as Esh and Dewease battled, Wagner drove off aboard his All Things Automotive #7W sprinter to score the win.

“We’re negative five grand in the bank account for racing and the only option is to win,” Wagner said.

Wagner drew the #1 envelope in victory lane and was presented another $500 bonus from race sponsor Wintermyers Auto Salvage. Wagner donated half of that bonus to Reinhardt for his “bad luck.”

Ott, Krimes and Dewease won heats for the 28 410 Sprints. Tyler Ross was the consolation winner.

Doug Hammaker muscled his way around leader Chandler Leiby on a lap 14 restart and drove to the win in the 25-lap 358 Sprint car feature.

Leiby led the first 13 laps from his pole starting spot but Hammaker, who started third got the upper hand on the restart for the race winning move.

Heats for the 29 358 Sprints were won by Gracey, Steven Drevicki and Nouse with JB Cunningham winning the consolation.

Next up on the BAPS Auto Paints and Supplies 410 Sprint Series event will be the Select Collision Kevin Gobrecht Classic presented by Hessiron.com on Sunday, May 7 honoring the life of the late 410 Sprint car star and brother of Susquehanna Speedway track owner Scott Gobrecht. Racing will begin at 7 PM.