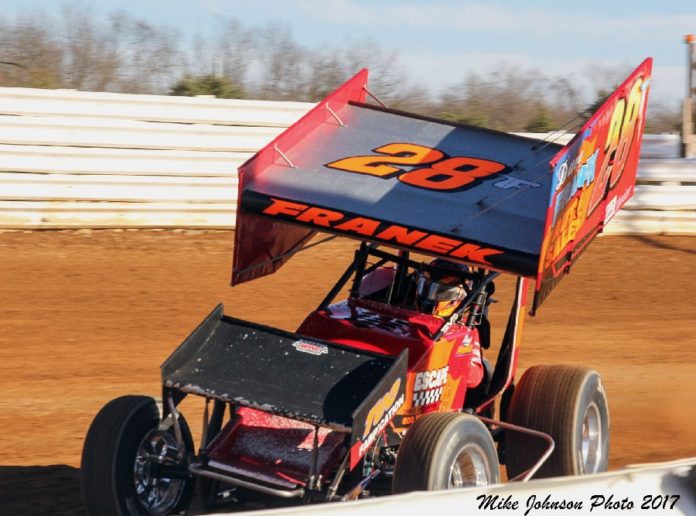 SELINSGROVE, PA – Davie Franek of Wantage, N.J.; Donnie Schick of Middleburg; and Brad Mitch of McClure gave the fans their money’s worth in feature racing Saturday at Selinsgrove Speedway. The night’s racing provided stiff battles for the top spots and valued trips to victory lane for each of the winners.

A collective groan went through the Selinsgrove crowd when Mark Smith’s name was announced as the polesitter for the 25 lap 360 Sprint Car feature event. It’s not that Smith isn’t popular among fans, it’s merely the fact that when the fast guy starts up front there is usually little to no chance there will be a pass for the win. That wasn’t the case Saturday night.

Smith bolted to the race lead while second-place starter Davie Franek gave chase. A mid-race yellow proved valuable for Franek as he pulled to the rear bumper of Smith’s m1 machine for the restart. Franek rolled around the outside on the restart and challenged Smith before the yellow flag flew when Chad Layton crashed in turn four.

Franek again used the outside on the restart. This time it would pay off with a successful slide job in turn three. Franek was now the race leader with Smith in chase. As Franek closed in on lap traffic in the final stages on the race, Smith would close slightly but not enough as Franek picked up his first win of the season.

“It’s rare you pass Mark Smith for a win,” Franek said in victory lane afterward, thanking his crew for their many hours in the shop to help them get the win. Smith crossed the line second ahead of opening night winner Jason Shultz. Mallie Shuster and Michael Walter completed the top five finishers. Layton and Shultz took heat races.


Donnie Schick has not been to victory lane at Selinsgrove since 2011 in the Jeff’s Auto Body Super Late Models. In the opening night feature event Schick looked like he might end that streak before a misjudged lap car took him out of the race lead. Schick came back this weekend and was out for redemption for himself, his race team, and his legion of fans.

Schick had challenges from Tony Adams and Danny Snyder, but neither ever posed a real threat to Schick. Schick crossed the line for the win in what he called an unbelievable moment. Adams and Snyder closed out the podium finishers. Jim Bernheisel made a rare Late Model start and drove to fourth with Dave Zona closing out the top five. Danny Snyder was the heat race winner.

The A&A Auto Stores Pro Stocks usually roll off as the first feature of the night. On this night, they made for a hard act to follow. Tommy Slanker was carrying all the momentum in the class after winning the season opener and jumping to the early race lead Saturday. On a lap four restart defending champion Brad Mitch, making his season debut, made a big move to slide into the race lead. Slanker crossed Mitch over and took the top spot back as the two continued the exchange.

Mitch would come away with the top spot after the two leaders “traded some paint” in the battle. Slanker lost some ground on lap 12 after slipping above the racing groove. Slanker quickly recovered and closed the gap with one lap to go. Even with Slanker’s advances Mitch held on for his first win of the season. Slanker was second ahead of John Fowler, Brandon Moser, and Kyle Bachman. Fowler and Mitch came across the line first in heat races.

Selinsgrove Speedway will sanction the first race of the season with the United Racing Club next Saturday, April 22. The 360 Sprint Cars will compete in the 37th annual Jack Gunn Memorial race. The Super Late Models and Pro Stocks will also be on the racing card. There has been a start time change with the racing rolling off at 7pm rather than the original 6pm scheduled time. Track gates will open at 5pm.