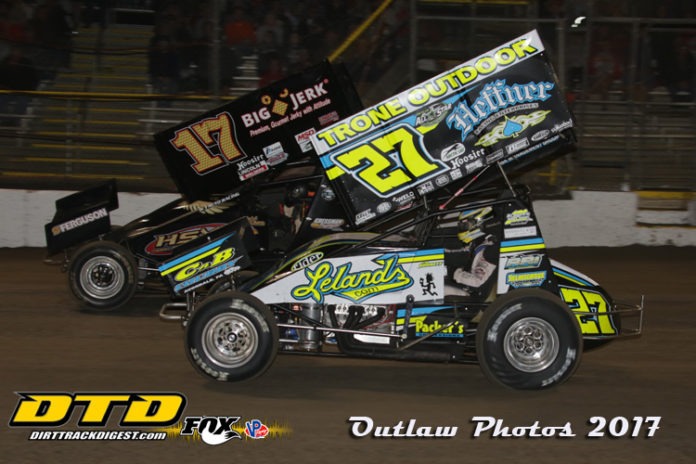 PORT ROYAL, PA – Port Royal Speedway will close the month of April in a big way on Saturday, April 29 when it hosts Tony Stewart’s Arctic Cat All Star Circuit of Champions Sprint Cars in the Keith Kauffman Classic at 6 pm, presented by Locust Grove Retirement Community.

The Kauffman Classic, honoring the oval’s all time winningest driver in both victories and track titles, will go 30 laps in distance, paying $5,000 to win.

Equally as impressive on April 29 will be the kickoff of the 2017 Moon Shine Camo® Rt. 35 Port Royal and Selinsgrove Speedways Dirt Late Model Challenge Series.


The six-race, dual track Moon Shine series has posted a $3,500 guaranteed point fund for the top-five in series points with other prizes posted for the top 10 in points.

In addition, after the final race in the series has been completed in September at Port Royal, all drivers who attended every contested race but who still finish outside the top 10 in series points will receive a $250 award from Moon Shine Camo®.

A stellar field of both super late models and super sprint cars is expected.

Defending All Stars champion Chad Kemenah of Findlay, Ohio, who has already raced to victory with the circuit this season, will be in attendance for the Kauffman Classic along with other All Stars members such as Ryan Smith, Caleb Armstrong, Max Stambaugh, Caleb Helms and more.

Dave Blaney has confirmed his expected entry into the event as well along with track favorite Lance Dewease.

They will all battle the Port Royal Pennsylvania Posse regulars such as defending champion and current point leader Doug Esh, Brock Zearfoss, Greg Hodnett, Mike Wagner and many more.

The total sprint car purse up for grabs in the race is worth more than $25,000.

Packer’s Concessions of Centre Hall will pay $100 to set fast time on the night.

Kauffman will take part in the event throughout the night on the public address system with commentary and memories, etc.