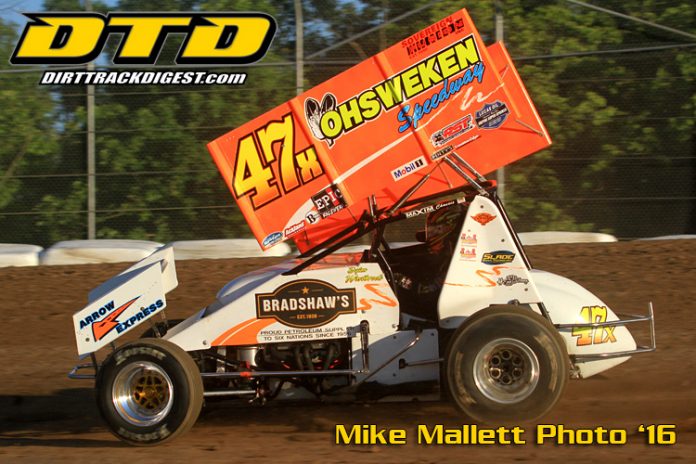 Kids 12 and under can sign-up for the Ohsweken Speedway Kids Club, which includes FREE grandstand admission, a souvenir t-shirt, membership card, VIP treatment and other cool perks throughout the season, such as pre-race activities, pit tours and driver meet & greets. Kids Club memberships are just $20.

KOOL KIDZ-CORR/PAK 360 SPRINT CARS
Alex Hill recorded her first career 360 Sprint Car win at Ohsweken to start the season last Friday night. With the Six Nations teenager away from the track this week, a number of drivers will look to become the second different winner in as many races. Scotland-based driver Dylan Westbrook currently holds the point lead ahead of Brantford’s Jake Brown, Caistor Centre driver Cory Turner and Fenwick’s Jim Huppunen.

STRICKLAND’S GMC CRATE SPRINT CARS
Ryan Hunsinger got things rolling in the right direction for his Durnin Motorsports team with a win in the Strickland’s GMC Crate Sprint Car division on Friday night. The opening race to the division’s fourth season marked the first time in its history a B-Main was required due to a car count of over 20. Hunsinger will look to make it two in a row this week while the rest of the field looks for their first win of the season. Hunsinger holds a slim four-point advantage in the championship standings over Caledonia’s Jesse McDonald, Shone Evans of Scotland, Josh Shantz of St.Agatha and Mack DeMan of Mississauga.


MIDDLEPORT MECHANICAL THUNDER STOCKS
Dave Bailey led only the final two laps of opening night, but it was enough to secure the opening night win and the points lead entering the second round of action on Friday. The defending track champion from Hagersville holds the early point lead over Jim Lampman, Shawn Chenoweth, Derek Lemyre and Karl Sault.

Race time is scheduled for 7:30pm. Pit Gates open at 5:30pm before Spectator Gates at 6:00pm. For additional event information or directions to the speedway, visit www.ohswekenspeedway.com.

About Corr/Pak Merchandising: Founded in 1997, Corr/Pak Merchandising Inc. is based in Richmond Hill, Ontario, and is a designer and producer of Point of Purchase (POP) displays for retail. Strong emphasis on creative design and speed of response has seen Corr/Pak achieve great success in a very competitive industry. Their in-house capabilities and broad range of trusted suppliers enable them to develop any sort of effective solution for your retail display needs, no matter the materials used – whether corrugated, wood, boxboard, plastic, wire, steel, or any combination of those. Corr/Pak’s support of the 360 Sprint Car division at Ohsweken continues for a 9th consecutive season in 2016. Please visit www.CorrPak.ca for more information.