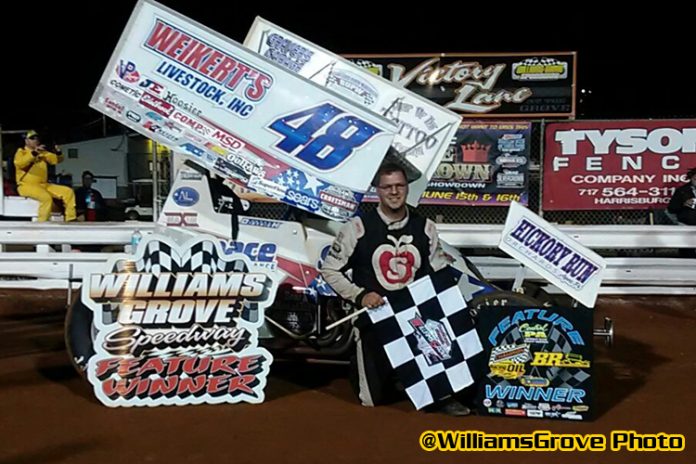 MECHANICSBURG, PA – Gettysburg’s Danny Dietrich piloted Gary Kauffman’s No. 48 sprint car to his first win of the Williams Grove Speedway season on Friday night, pocketing $4,000 for the victory in the second leg of the 2017 Diamond Series.

In the 20-lap PASS 305 sprint main, Mark Watkins took the win after Ian Detweiler spun out of the lead with four laps to go.

For Dietrich, it was a flag to flag victory in the 410 sprint main, with his pace slowed only once, on the second lap.

The caution period was for the stopped cars of Brock Zearfoss and Jay Galloway in the second turn. The incident began when TJ Stutts nearly spun his mount before continuing on while the other two cars got collected.

Dietrich entered traffic on the eighth lap with Freddie Rahmer and Dale Blaney chasing him for the lead as they had since the drop of the green flag.


With 15 laps to go in the 25-lap feature, Lance Dewease got around Blaney for third while trying to catch Rahmer.

However neither Rahmer nor Dewease was able to close on the leader as all of the front-runners worked through traffic.

Dewease made a few attempts at an outside fourth turn pass of Rahmer for second but saw little results for his efforts.

Dietrich cruised unscathed to the victory by .393 seconds over Rahmer with Dewease finishing third followed by Blaney and Greg Hodnett.

The win was the 16th of Dietrich’s career at Williams Grove.

After two attempts at a start of the 305 sprint main, Ian Detweiler took the lead and had Mark Watkins chasing him in second when a caution flag unfurled with nine laps completed.

On the restart, Stephanie Dodson got around Watkins for second and again swapped the spot in the fourth corner before the lap could be completed.

And as it would turn out, that flip flop for second on the restart ended up being the race for the lead as Detweiler spun in front of the field while in command on the 16th tour, causing another yellow flag period and handing the lead to Watkins.

Dodson was unable to challenge on the lap 16 restart and it was Watkins taking advantage of the spin for the win.