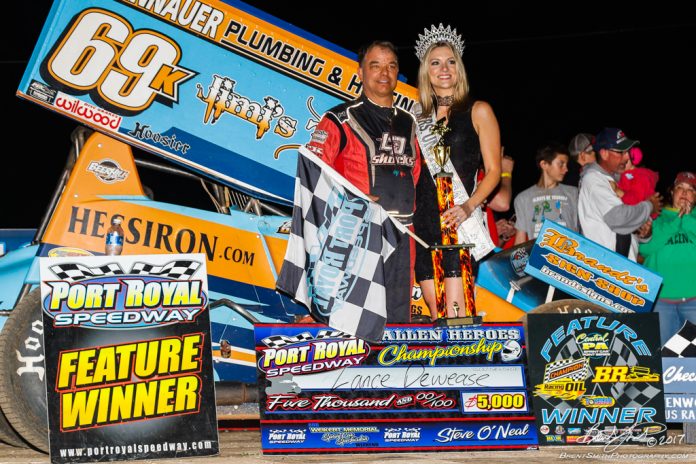 Port Royal – Lance Dewease of Fayetteville and Austin Hubbard of Seaford, Del., picked up the prestigious Fallen Heroes Championships for 410 sprints and super late models at Port Royal Speedway on Saturday night in what was a pair of thrilling, multiple leader 30-lap main events run as part of the Bob Weikert Memorial weekend at the oval.

The $5,000 win for Dewease, his second of the year at the track and 102nd of his career there, came only after he overtook three earlier leaders in Trey Starks, Dale Blaney and Danny Dietrich.

Blaney won the dash to earn the pole for the 410 sprint car feature event with Starks starting the event in second spot.


Starks got the drop on Blaney when the green flag unfurled but only the first lap could be recorded before Trenton Sheaffer brought out the red flag with what was a vicious crash in the first turn that annihilated his car after contact with the outside fence.

Sheaffer flipped wildly into the first turn collecting Carl Bowser in the destruction although both escaped injury.

Blaney dug hard on the restart and for the next three laps before he was able to muscle underneath Starks for the lead in the fourth corner and take command.

Meanwhile, eighth starter Dewease seemed to be rather stagnant and when a three-car tangle brought out another yellow flag on the eighth tour, the running order was Blaney, Starks, Buckwalter, Dietrich, Zearfoss and Dewease.

Starks took a few jabs for control on the restart but Blaney pulled away as Dietrich flexed his muscle to work into third and then into second on the 12th tour.

Dietrich was very fast during the mid-stages using the topside of the speedway and he was able to catch Blaney at the halfway point as Dewease began gaining speed around the bottom groove.

Gettysburg’s Dietrich, flying the Weikert’s Livestock No. 29 colors as part of the Bob Weikert Memorial weekend races at the track, took the lead from Blaney with 14 laps to go but soon found he couldn’t get away from the field.

By this time Dewease was mowing down his foes around the inside of the speedway, motoring into a challenging third on the 17th lap.

Working through traffic with 10 laps to go, Dietrich did his best to open up an advantage as the leader but Dewease came to second with seven laps to go and then chugged by for control and the win with five laps to go.

Dietrich and Dewease exchanged the lead in the first and second turns on the 25th lap before Dewease went back out in front for good in the third turn to run to the win by 1.259 seconds.

The win puts Dewease just 27 back of Port Royal all time sprint car winner Keith Kauffman on the oval all time win list.

After motoring from 22nd to 11th at the finish, Brent Marks earned the Beer Hill Hard Charger award worth $229 and earned a guaranteed starting spot in the Sunday Weikert Memorial itself.

Heats went to Buckwalter, Starks, Zearfoss and Ott with the consolation going to Tyler Walker while Blaney won the dash.

An equally thrilling super late model main unfolded following the sprint car feature with no less than three leaders throughout.

Matt Cosner took the lead from the second starting spot over Coleby Frye when action began with Jeff Rine moving into third on the second lap.

Cosner entered lapped traffic on the 11th tour as both Frye and Rine battled relentlessly for second while both drivers gained on the leader.

Rine briefly and barely secured second on lap 16 but by that time Cosner was in heavy traffic and Frye used the traffic to his advantage to set up a thrilling, extremely rare three-wide move for control.

Headed through the fourth turn on the 17th lap with Rine on the inside and alongside Cosner for the lead, Frye went way high and wide to make it three-wide for the lead as the trio raced onto the frontstretch.

Frye upended the pair at the line to take control but by that time eyes turned to sixth starter Austin Hubbard who was clearly on the move.

Hubbard got by Cosner for third with 11 laps to go and then worked on Rine for several laps before getting second with five laps to go.

Just two laps later, Hubbard had run down leader Frye and in rather typical Coleby Frye fashion, Hubbard powered to the deep inside of the third turn to pull a slide job on Frye himself for the lead.

Hubbard crossed the line as the leader with three to go before another caution flag bunched the field.

The restart saw Hubbard pull away as Frye worked to hold off Rine.

Hubbard then sped to the finish and took the $3,000 checkered flag simultaneously as a caution was required for a spin on the backstretch.

Heats for the 35 late models in action went to Rine, Chad Hollenbeck and Frye with Devin Friese taking the consolation. 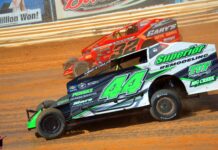