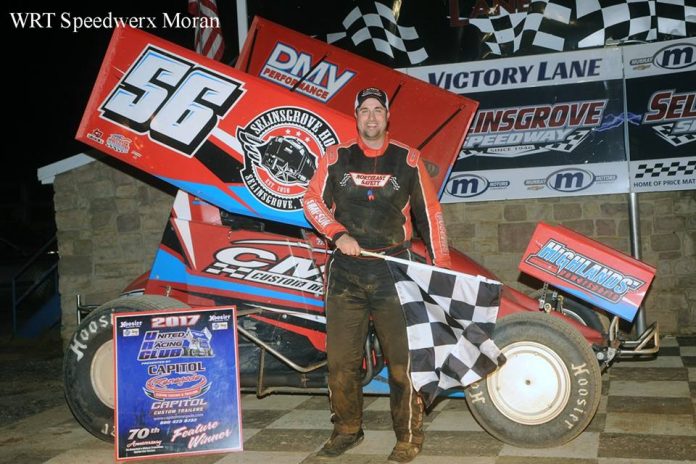 SELINSGROVE, PA – The sun shined for one of the first times on a Saturday night all year as Selinsgrove Speedway offered one of its most exciting weekends in racing. PEPSI Night at the track saw the second appearance of the season by the United Racing Club 360 sprint cars plus the Pro Stock 20, Late Models, and season opener for the Roadrunners.

Eddie Strada showed the way early before he had car problems taking him out of contention on lap number seven of the 25-lap URC 360 sprint car main event. Nate Snyder was in search of his first win at the track since 2011. Numerous restarts gave Derek Locke and Cody Keller opportunities to try to go by the race leader. Snyder held tough at the front.

On lap 17 Locke made his best attempt to take the race lead after reeling in Snyder in lap traffic. Locke pulled even with Snyder, but Snyder fended off the challenge and got away from Locke on his way to the checkered flag. Locke finished in second just ahead of Mallie Shuster.

Heat races for the 360 Sprint Cars were won by Jason Clauss, Eric Tomecek, and Brett Michalski.


Hayes Mattern looked like a lock to be the Late Model feature winner on Saturday night as he drove away from the field in the 20-lap feature. A lap eight yellow flag would change the whole complexion of the race. Mattern did not get a good restart and Danny Snyder took advantage of it racing into the top spot. Snyder led the way until lap 12 when Mattern would get the top spot back and bring Steve Campbell with him.

Campbell followed Mattern closely for the next few laps before pulling to the inside on lap 19 to try to grab the win away. Campbell’s car spun at the exit of turn two during the battle on the final lap.

The spin set up a one lap shootout that saw Mattern hold off a pretty tough charge from Donnie Schick who finished second. Snyder was third across the line followed by Tony Adams and Gene Knaub.

Brad Mitch can recall a lap 12 caution flag as one of the crucial moments in his quest to be a two time winner of the A&A Auto Stores Pro Stock 20. Mitch slid up the race track and allowed Tommy Slanker to take the race lead, but a yellow flag negated the pass and Mitch was placed back in first spot.

Slanker spent the rest of the race tailing Mitch at the front with Shawn Lawton hanging in the shadows running third. On the final lap Slanker dove to the inside of Mitch setting up a drag race finish. The finish became very melodramatic when Slanker’s car began dumping fluid and his car slowed off turn 4 allowing Mitch to pull away to the win over Shawn Lawton.

The night cap run by the Roadrunners kept the fans on the edge of their seat. Keith Bissinger, the defending champion, flipped in his heat and was starting deep in the field. A returning Bob Bussey grabbed the lead away from Ryan Leister early on. Brian Johnson got into the outside wall on a restart that saw he and Bissinger run a lane higher than what the track had to offer. It was at that point that Bussey realized he needed to move up to the high side of the track before he got passed.

Bussey did just that and won the Roadrunner season opening event. Bissinger finished second ahead of Will Brunson, Smith Cope, and Leister.

For the second week in a row the speedway had many of the standing track records broken. Meade Hahn broke the track record In the Late Models after the first heat race of the night before Danny Snyder broke it again in the second one.

Next Saturday will mark the third race of the season at Selinsgrove Speedway for the united racing club in the annual Kramer Cup in memory of former champion Kramer Williamson. The Race will run 30 laps and pay $2,573 to win.

The Mid Atlantic Modifieds and Econo Late Models will also join the Sprint Car teams as well as the Pro Stocks. 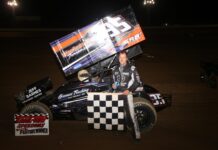